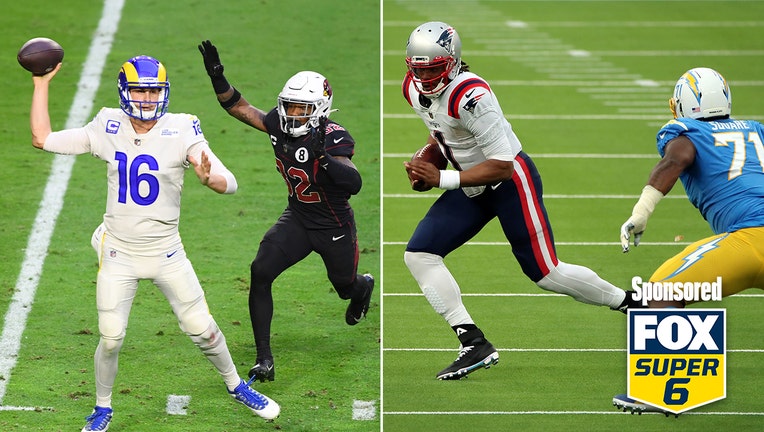 LEFT: Quarterback Jared Goff #16 of the Los Angeles Rams looks to pass under pressure from strong safety Budda Baker #32 of the Arizona Cardinals during the second half at State Farm Stadium on December 06, 2020 in Glendale, Arizona. (Photo by Norm H

On Thursday Night Football this week under the big roof of SoFi Stadium in Inglewood, California (8:05, FOX), both of them will meet again with a lot riding on the line for their 2020 playoff hopes.

And being able to predict the big events of this game could help you win $25,000 in FOX’s Super 6 contest.  Just download the free app, answer six questions correctly and you could win up to $25,000 while watching football. It’s that simple.  Here’s the questions and how to look at it

What will be the last scoring play of the 1st half?
Patriots TD, Patriots FG, Rams TD, Rams FG, Any other score/no score

The Rams defense has been terrific in shutting down teams that prove to be one dimensional. And while Cam Newton has given the Patriots offense a different look as a mobile quarterback, it is important to understand that New England’s passing game isn’t close to what it was under Tom Brady. The Rams are definitely more balanced and capable of getting plays out of the running and passing game.

One of the hallmarks of the Bill Belichick era has been that ability to double up around halftime. Belichick was the first to popularized deferring the option to the second half on the coin flip with the hope of scoring before the half, then putting a big old hammer out to start the third quarter with a score. However, the Rams defense is about as stout as it comes in the game and Los Angeles has the deeper roster.

The beauty of both these rosters is the fact that its multiple players who can turn into potential big play makers and scorers.  Nine different Patriots have scored touchdowns so far this season while Los Angeles has 11 different ones. However, the mitigating factor is that the Rams defense could easily hold the Pats to single digits in points.

This is a tempo game and for New England to come close to winning, they will likely have to play a game that is similar to the 13-3 slugfest they played in Super Bowl LIII with ball possession, getting into Jared Goff’s face and making life uneasy. The problem is that the Rams offense has a lot more depth than it did on that February night in Atlanta.  This stacks up to be a low scoring game.

New England has depended on using Newton’s running game in the past five weeks to hang into the race and to keep the Patriots close in games. The issue for the Patriots is can they put up big numbers if this game turns into a shootout against that Rams defense. Los Angeles could easily throw up 400 yards of total offense in a blink. It seems doubtful to think that the Patriots could.

Choose the winning team and by how many points?

This coaching job by Belichick, Josh McDaniels and the rest of the New England staff to have the Pats within spitting distance of a playoff spot has been nothing short of remarkable when you look at the roster and the COVID-19 difficulties they experienced in October.

All that being said, the Rams are deeper right now with the much better defense. New England may hang around, but the idea of two games across country in the span of a week could wear them out. Expect the Rams to keep the lead in the NFC West and keep pressure on Seahawks to keep up.