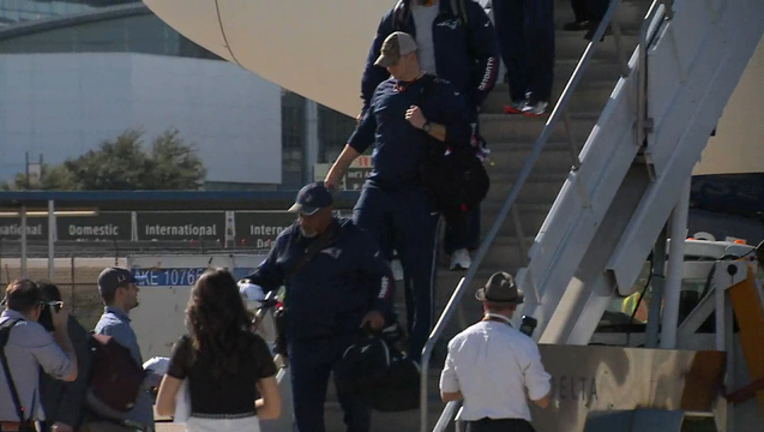 HOUSTON (AP) - Robert Kraft is pulling his punches over "Deflategate."

Well, some of them.

While the New England Patriots owner and once close confidant of NFL Commissioner Roger Goodell wants to celebrate yet another trip to the Super Bowl this week, he also couldn't back down from a challenge Monday night to address the whole mess. So Kraft took a couple of shots during the Patriots' availability, yet also made sure not to temper the festive mood.

"Everybody wants to protect their family," Kraft said when asked about the aftermath of the deflated footballs case from the 2014 AFC championship game that resulted in Tom Brady's four-game suspension, a $1 million fine for the franchise and the loss of its first-round draft pick in 2016.

"I think our family was involved, or accused of being involved, in something that was mishandled and became inappropriate. Sometimes in a complicated situation in business, people start pointing fingers, and we want to assure everyone that we are together."

Kraft then cited a Hebrew saying from the Old Testament.

"When tough times come," he translated, "there's nothing bad that happens that doesn't have good associated with it.

"In a way, that galvanized our team."

Sure looks that way considering the Patriots (16-2) had the NFL's best record this season, eased to the conference title with lopsided wins over Houston and Pittsburgh and are 3-point favorites for Sunday's Super Bowl against Atlanta (13-5).

After the home victory over the Steelers, Kraft accepted the Lamar Hunt Trophy - no, Goodell was not on hand to present it - and made a not-too-veiled reference to "Deflategate."

"For a number of reasons, all of you in this stadium understand how big this win was," Kraft said. "And we have to go to Houston and win one more."

He's in Houston with his team now, and Kraft tried to stick to the business at hand, not carrying out any vendetta.

"I feel privileged to be here in the Super Bowl city," he said. "There's a time and a place to talk about problems. I'm going to stay focused on being here."

Kraft is such a veteran of Super Bowls, having also been to one in 1997 with Bill Parcells as his coach, that he gets calls from other owners about how to handle the week. So it was no surprise when he revealed that Falcons boss Arthur Blank called him.

"Arthur asked me for some advice about being in (the Super Bowl)," Kraft said. "I told him, 'Don't let anyone ruin these two weeks for you. Focus on how lucky we are to be here.'"

Kraft must have heard the chorus of boos when his team captains were introduced onstage after Atlanta's media session and before New England's. The Falcons' captains weren't subjected to any such jeers.

It wasn't in direct response to that moment, but Kraft did say something that reflects how his team hardly engenders the same warm feelings across America that the Cubs recently did.

"Jealousy and envy are incredible diseases," he said. "We try to take it and turn it into something that's positive."