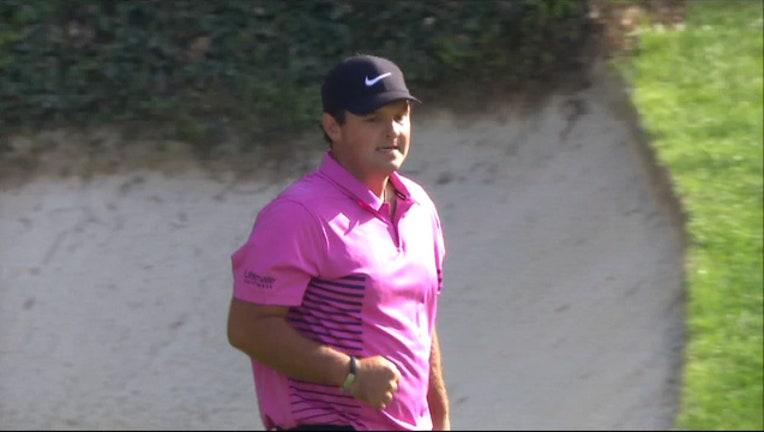 AUGUSTA, Ga. (AP) - Patrick Reed became famous playing for his country. He won for himself on Sunday at the Masters.

Rory McIlroy came after him early. Jordan Spieth briefly tied him for the lead. Rickie Fowler birdied the last hole to leave him no room for error. Reed never flinched through it all on a raucous afternoon at Augusta National, calmly rolling in a 3-foot par putt for a 1-under 71 and a one-shot victory.

Even as the loudest cheers were for everyone else, Reed earned all the respect with two big birdie putts on the back nine, one key par and plenty of grit.

The 27-year-old Texan is the fourth straight Masters champion to win his first major.

Fowler made an 8-foot birdie putt on the last for a 67 - and his third runner-up finish in a major.

Spieth put up the most unlikely fight and was on the verge of the greatest comeback in Masters history. He started nine shots behind going into the final round, and was inches away on two shots from a chance at another green jacket. His tee shot on the 18th clipped the last branch in his way, dropping his ball some 267 yards from the green. His 8-foot par putt for a record-tying 63 narrowly missed on the right. He had to settle for a 64.

Reed won for the sixth time in his PGA Tour career, though he was best known for the trophies he shared at the Ryder Cup. He is ferocious in match play, especially the team variety, and his singles victory over McIlroy at Hazeltine in 2016 led to the nickname of Captain America.

McIlroy will have to wait another year for a shot at the career Grand Slam. Trailing by three shots to start the day, he closed within one after two holes. That was as close as he came. McIlroy's putter betrayed him, and he was never a factor on the back nine. He shot 74 and tied for fifth.

Stephanie Meadow won the Symetra Tour's IOA Championship in Beaumontt, California. The former Alabama star from Northern Ireland made a 40-foot birdie putt on the first hole of a playoff with Carleigh Silvers. Meadow closed with a birdie for a 70. Silvers bogeyed the 18th in regulation for a 71 to drop into the playoff. ... Ji-hyun Kim won the Lotte Rent-a-Car Women's Open on the LPGA Tour of Korea in an event shortened to 36 holes because of rain. She shot rounds of 67-68 for a one-shot victory over Ji-Hyun Oh. ... Ai Suzuki won for the second time this year on the LPGA Tour of Japan at the Studio Alice Women's Open. She closed with a 2-under 70 for a four-shot victory over Yoshiha Rumi.