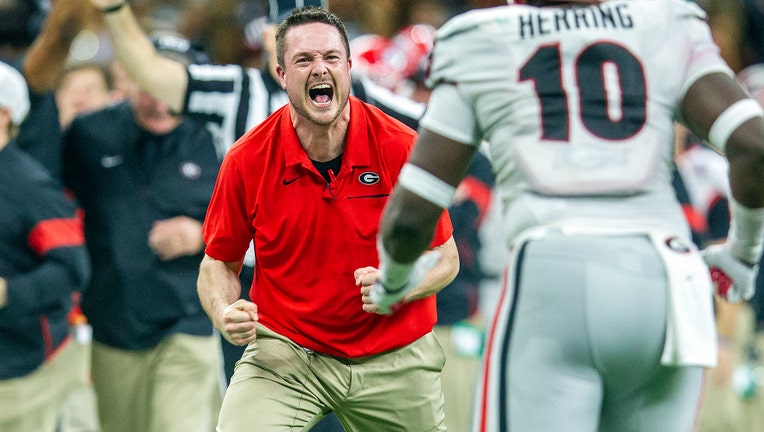 NEW ORLEANS, LA - JANUARY 01: Georgia Bulldogs assistant coach Dan Lanning celebrates during the Sugar Bowl game between the Georgia Bulldogs and the Baylor Bears on January 01, 2020, at the Mercedez-Benz Superdome in New Orleans, Louisiana. (Photo b

Cristobal was hired away from Oregon by Miami on Monday. Five days later, the Ducks landed on the 35-year-old Lanning, who will be a first-time head coach after spending the last four years at Georgia, the previous three leading one of the best defenses in the country.

"We are staged for success and I look forward to building on the strong foundation that currently exists in Eugene," Lanning said in a statement. "Our goal is to win championships and develop our players both on and off the field. "

No. 3 Georgia (12-1) has the top-ranked defense in the country this season and will play No. 2 Michigan in the College Football Playoff at the Orange Bowl on Dec. 31.

Georgia coach Kirby Smart said in a statement that Lanning would stay with the team through its playoff run. Inside linebackers coach Glenn Schumann and special teams coordinator Will Muschamp will be co-defensive coordinators for Georgia after Lanning moves on.

"We are so happy for Dan and his family," Smart said. "He and (wife) Sauphia have been an important part of our Bulldog family for the last four years, and we thank them for all they did for Georgia Football and the Athens community.

"Opportunities like this are a testament to a successful program."

Cristobal returned to his alma mater and hometown following four full seasons in Eugene as head coach. The Ducks went 35-13 under Cristobal, reaching the Pac-12 title game each of the last three seasons.

Lanning will be the Ducks’ third head coach since Willie Taggart took the job after the 2016 season, and fourth since Chip Kelly left for the NFL after the 2012 season.

Taggart replaced Mark Helfrich, but lasted just one season in Eugene before he returned to his home state to coach Florida State.

Cristobal was promoted from offensive coordinator to head coach to replace Taggart.

Now Oregon is going outside the program again, reaching across the country to hire a defensive coordinator as head coach after decades of being led by coaches with offensive backgrounds, starting with Mike Bellotti in the 1990s to Chip Kelly in the 2000s.

"Dan is an outstanding, high-energy football coach who will provide a world-class experience for our football student-athletes," Oregon athletic director Rob Mullens said. "He is a tremendous recruiter and developer of talent, and we will continue to compete for championships while providing an environment where our football student-athletes can develop to their fullest potential in the classroom, on the football field, and as people."

Lanning is a Missouri native who played football at Division II William Jewell in Liberty.

He started his coaching career at a high school outside Kansas City before bouncing from Pittsburgh to Arizona State as a graduate assistant. His first full-time job in Division I was with Arizona State and he spent a year with FCS Sam Houston State in 2014.

He did a stint as a graduate assistant at Alabama in 2015, and then his career took off. He was hired by Memphis as linebackers coach in 2016, and Smart brought him to Georgia in 2018.

He was promoted to defensive coordinator at Georgia in 2019. The Bulldogs have ranked in the top 10 in yards per play allowed in each of the past three seasons.