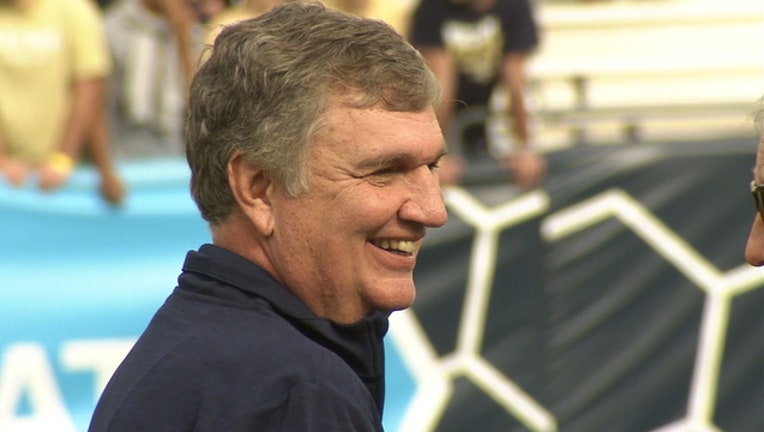 The Yellow Jackets (4-4, 2-3 ACC), playing without starter TaQuon Marshall, finished with 465 yards - all on the ground. Jordan Mason also scored three times as Georgia Tech won its third straight against the Hokies and third straight in Lane Stadium - without completing a pass.

"That was huge," said Jalen Johnson, who recovered the fumble. "The offense was rolling and we got the ball back."

Hokies coach Justin Fuente said the play wasn't the only issue, but it was a big one.

"It certainly was a big play, no question, but I don't feel it was the only play," he said.

Defensive coordinator Bud Foster's team gave up its most rushing yards since SMU got 500 in 1973.

"They did a great job blocking us. It's not just our front four. It's our front seven, our linebackers. They manhandled us tonight when it's all said and done."

Georgia Tech scored the next 35 points and became the third team to score at least 45 against Virginia Tech this season. Old Dominion (49) and Notre Dame (45) are the others. Virginia Tech hadn't given up at least 40 points to three teams since 1991 when Miami (43), Rutgers (50) and Virginia (41) did it.

Virginia Tech talked all week of keeping the Yellow Jackets from dominating the time of possession.

In between, the Yellow Jackets went 75 yards in 12 plays and followed Virginia Tech's second TD with an 11-play, 75-yard march to tie it at 14. Oliver kept the first drive alive with a 15-yard scramble, and Qua Searcy gained nine on a fourth-and-1 from the Yellow Jackets' 34 on the second drive.

The loss also cost the Hokies their grip on first place in the Coastal Division as they dropped into a tie with Virginia for the lead.

Georgia Tech: Oliver (7 yards per carry coming in vs. Marshall's 4.7) routinely spun away from contact to gain additional yards against the Hokies. But Marshall connected on 60- and 80-yard scoring throws to beat Virginia Tech last season, and Oliver's lone attempt - just his 10th attempt of the season - was miserably short of his target, leading to their first punt, which proved to be the turning point.

Virginia Tech: The Hokies' young defense again got burned by a backup quarterback. In a 49-35 loss at Old Dominion early in the season, drop-back passer Blake LaRussa replaced dual-threat Steven Williams and threw for 494 yards and four touchdowns for the previously winless Monarchs. TaQuon Marshall had started all seven games for coach Paul Johnson heading into the game, but sat out Thursday night with an undisclosed "upper body" injury.

The Yellow Jackets are back on the road, playing at North Carolina next Saturday.