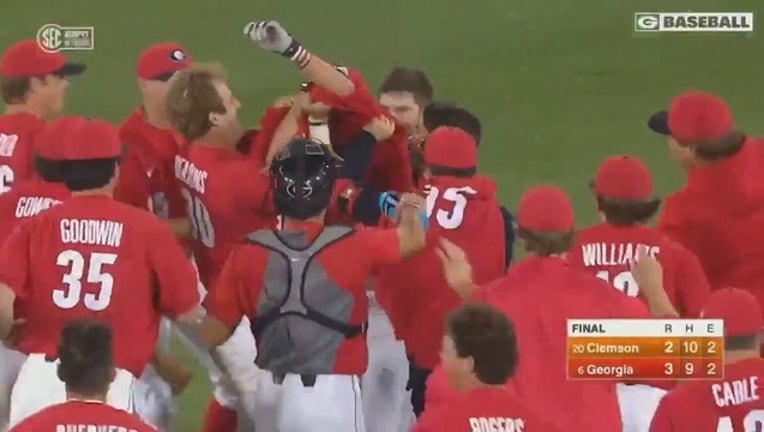 ATHENS, Ga. (FOX 5 Atlanta) - The longest game in school history ended after six hours and 33 minutes with fifth-ranked Georgia outlasting No. 24 Clemson 3-2 in a school record 20 innings in front of a Foley Field crowd of 3,419.

In the bottom of the 20th inning, with the game tied at two, the stage was set for freshman right fielder Connor Tate. With walks to junior center fielder Tucker Maxwell, and senior second baseman LJ Talley, as well as a single from sophomore right fielder Riley King, the Bulldogs had the bases loaded. Tate delivered with a walk-off single to left field, scoring Maxwell, and ending the marathon. The previous longest game for Georgia was 5:02 in 13 innings against Alabama last year, and the most innings ever played before Tuesday was 17 against Gardner Webb in 2007. Clemson’s previous longest game was 19 innings.

Georgia improved to 30-8 and swept the two-game series for the second year in a row while the Tigers fell to 25-12. Clemson led 2-0 in the sixth and Georgia tied it with a pair of unearned runs in the seventh. It remained tied for the next 12 innings.

After five scoreless innings, the Tigers broke through with two runs in the sixth inning. After sophomore Sam Hall singled to begin the inning, junior Kyle Wilkie singled up the middle, scoring Hall. The next batter, freshman Bryar Hawkins, tripled which scored Wilkie, and gave the Tigers a 2-0 lead. Junior LHP Justin Glover was brought in relief of starter Tim Elliott, and he kept it a two-run contest.

In the bottom of the seventh inning, Georgia responded. Junior designated hitter Austin Biggar got on base with a walk, and was then replaced with a pinch runner, freshman Steven Minter. Junior shortstop Cam Shepherd then delivered, doubling down the left-field line. The Clemson left fielder had a throwing error, and not only was Minter able to score, but Shepherd as well, as Georgia pulled even 2-2.

Elliott had a quality outing for the Bulldogs. He tossed five and two-thirds innings, while yielding two runs on five hits. He also tied a career high of seven strikeouts, which he has now done five times.

Ike Cousins Head Baseball Coach Scott Stricklin
On the game...
“We have a tough team and that was a big win. To go that long it absolutely stinks to lose it but one team had to lose. Our bats were getting slow and our guys were getting fatigued. We used just about everyone on the bench tonight, we had four pitchers get an at bat today and that’s not something you see very often. But we found a way to win and it was a lot of fun. By the 15th the guys were slap happy, they were wearing motorcycle helmets and playing ping pong in the dugout which is something I have never seen before. Our student section came in during the 19th and sat directly behind home plate and that was awesome. It was just a really fun game.”

Freshman RF Connor Tate
On what's going through his mind in the last at bat in the bottom of the 20th...
"I mean it's really the same. You have to keep each at bat the same. Same mindset. Don't try to get too nervous. Try to make something happen."

On rounding first after his walk off hit...
"It felt really good. I haven't felt like that in a while."

Up Next
Georgia will host No. 21 ranked Missouri in Athens for an SEC series that begins Thursday at 6 p.m. on ESPNU.