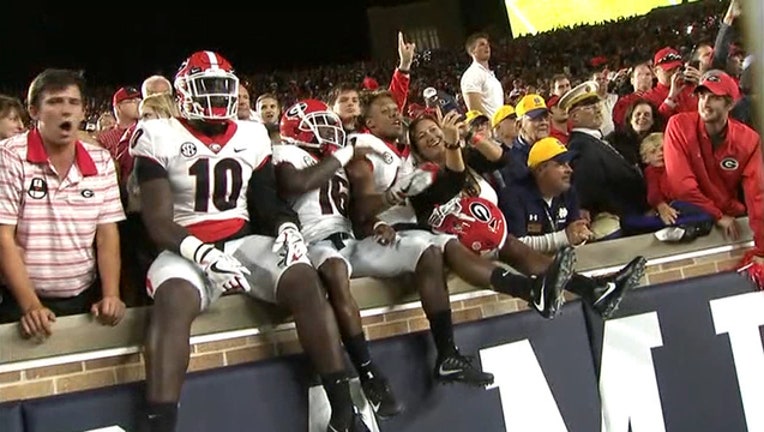 SOUTH BEND, Ind. (AP) - Lorenzo Carter and Davin Bellamy led a swarming Georgia defense and the No. 15 Bulldogs got just enough plays from an offense starting a freshman quarterback to beat No. 24 Notre Dame 20-19 on Saturday night in their first road trip to this part of country in more than five decades.

The first regular-season meeting between the storied programs was a hard-hitting, penalty filled tug-o-war.

Rodrigo Blankenship kicked a 30-yard field goal with 3:39 remaining to give the Bulldogs (2-0) a one-point lead, and that was enough for Carter and company.

Georgia stopped Brandon Wimbush and the Fighting Irish (1-1) on downs once. Then, on Notre Dame's final drive, Bellamy blind-sided the quarterback and Carter recovered the fumble with 1:27 left to seal it.

Wimbush scored Notre Dame's only touchdown in the first half on a 1-yard run and finished 20 for 40 for 210 yards with two lost fumbles. Carter had a strip sack in the second-half, too.

Georgia: The Bulldogs had not ventured this far north for a game since 1965 against Michigan. They brought thousands of their fans with them and started freshman Jake Fromm at quarterback. Fromm was filling in for the injured Jacob Eason and making his first career start. The Bulldogs tried not to put too much on the former Little League World Series hero from Warner Robins, Georgia. He went 16 for 29 for 141 yards with a touchdown pass - thanks to a reaching, one-handed grab by Terry Godwin in the first half - and two turnovers.

Notre Dame: The Notre Dame hung in against one of the best running-back combinations in the country in Nick Chubb and Sony Michel, an encouraging sign for a unit the struggled mightily last season. The Bulldogs ran for 185 yards and 4.3 per carry. New defensive coordinator Mike Elko doesn't have a lot of game-changers or depth on that side of the ball, but the Irish did a good job of getting lots of defenders to the ball.

Georgia sold 8,000 tickets for this game in no time, and there was easily twice that many wearing read in Notre Dame Stadium. For former Georgia coach Vince Dooley, who won the school's only national title by beating Notre Dame in the 1981 Sugar Bowl, it was the best part of the trip to South Bend.

"I was just saying what a beautiful scenery it is right outside looking out and seeing Touchdown Jesus and the Golden Dome overlooking the campus. And then seeing those beautiful golden helmets shining. Of course, I like the red ones, too," said Dooley, who threw out the first pitch at the Cubs game at Wrigley Field on Friday night. "And seeing so many Georgia people here. That's what's really been amazing."

Georgia: The Bulldogs return home a presumably easy game against FCS Sanford, before starting SEC play against Mississippi State the next week.