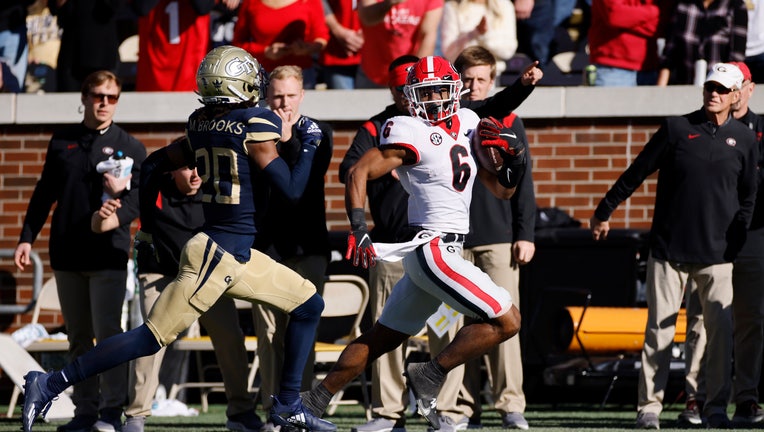 ATLANTA, GA - NOVEMBER 27: Georgia Bulldogs running back Kenny McIntosh (6) runs down the sideline for a 59-yard touchdown during a college football game against the Georgia Tech Yellow Jackets on Nov. 27, 2021 at Bobby Dodd Stadium at Historic Grant

ATLANTA - Stetson Bennett helped No. 1 Georgia finish a perfect regular season, and then shifted his attention to Alabama.

Bennett passed for 255 yards and four touchdowns, including two to tight end Brock Bowers, and No. 1 Georgia overwhelmed Georgia Tech 45-0 on Saturday.

Georgia (12-0) gained momentum for next week’s much-anticipated Southeastern Conference championship game against No. 3 Alabama in Atlanta.

In the rivalry known as "Clean Old-Fashioned Hate," the Bulldogs played a clean game with no turnovers or penalties.

It is the first undefeated regular season for the Bulldogs since 1982, when they capped a streak of three consecutive SEC championships with tailback Herschel Walker.

Georgia now can focus on its drive for SEC and national championships.

"What we have done in the regular season is all good, but if we don’t finish it the right way none of this matters," said linebacker Nakobe Dean, who led the defense with six tackles and two quarterback hurries.

Georgia Tech (3-9) finished with three wins for the third consecutive season under coach Geoff Collins, who acknowledged this week he will need to show improvement next year. The Yellow Jackets closed the season with six consecutive losses following a 3-3 start.

The losing streak included losses to No. 6 Notre Dame and Georgia by a combined margin of 100-0 the last two weeks, putting more heat on Collins.

"The last two games were a step back," Collins said. "Let’s get that out of the way. Against two of the top six teams in college football. But every other game, the way we’ve matured and closed the gap, that’s real."

Georgia Tech has not closed the gap on Georgia. The battle for state bragging rights was a mismatch.

Georgia, which began the day leading the nation with its averages of 7.5 points and 236 yards allowed, posted its third shutout while giving up only 171 yards.

"I’ve coached a lot of seasons in the SEC," Georgia coach Kirby Smart said. "Three shutouts is hard to come by."

Bowers had a 77-yard touchdown catch, and Kenny McIntosh added a 59-yard scoring run. Bowers, a freshman, also scored on a 9-yard catch. He has 10 touchdown receptions, a school record for tight ends.

Relying on its top-ranked defense and Bennett’s accurate passing, Georgia was dominant in its fourth consecutive win in the state rivalry. The Bulldogs gave up only 67 yards in the first half.

Jordan Yates made his third consecutive start, and sixth overall, at quarterback for Georgia Tech. Yates passed for only 73 yards, including a 40-yard completion to tight end Dylan Leonard in the third quarter. That drive ended with a fourth-down incompletion from the Georgia 33.

Georgia’s defense delivered another fourth-down stop early in the fourth quarter. Yates fielded a low shotgun snap and was sacked by Robert Beal for a loss of 10 near midfield.

Bennett completed 14 of 20 passes, including scoring passes of 25 yards to Jermaine Burton and 11 yards to Ladd McConkey. Daijun Edwards had a 3-yard scoring run in the fourth, with quarterback JT Daniels and other backups on the field.

Georgia has won 10 of the last 12 in the series, including the last four. For the first time since 1924, the teams did not play last season as SEC schools played only conference schedules due to the coronavirus pandemic.

Georgia: Plays No. 3 Alabama in the SEC championship game in Atlanta.

Georgia Tech: Opens its 2022 season against Clemson on Sept. 5 at Mercedes-Benz Stadium in Atlanta.