Two of them, in fact.

The New Orleans defense finally gave up a touchdown.

But not two, which ensured the Saints are headed back to the playoffs for the fourth year in a row.

Hill won another start filling in for injured Drew Brees and New Orleans got the big defensive stop it needed in the closing minutes to preserve a 21-16 victory over the Atlanta Falcons on Sunday.

The Saints (10-2) clinched a playoff berth with their ninth straight victory and Chicago’s 34-30 loss to Detroit.

“Our work’s not done yet,” defensive end Trey Hendrickson said.

Hill connected with Tre’Quan Smith on a 15-yard touchdown in the opening quarter — the quarterback’s first scoring pass since his senior year at Brigham Young in 2016.

He added another before halftime, zipping an 11-yard pass to tight end Jared Cook in tight coverage.

“I don’t care as much as people might think,” said Hill, who improved to 3-0 filling in for Brees. “I know there was a lot of conversation about getting that first TD completion. But as long as we’re winning football games, I’m happy.”

Hill was 27 of 37 for 232 yards passing. He tacked on 83 yards rushing on 14 carries, including a 43-yard scamper that was the longest run of his career, setting up his first TD pass.

“I thought his performance was strong,” coach Sean Payton said. “He made a lot of throws.”

If there was one flaw in Hill’s game, it was hanging on to the football. He had a couple of fumbles, the first coming deep in Atlanta territory to spark the Falcons’ comeback.

Atlanta drove 85 yards capped by Matt Ryan’s 10-yard touchdown pass to Russell Gage with 7:43 remaining. New Orleans hadn’t allowed a touchdown since the opening drive of a game against San Francisco on Nov. 15, a span of 14 quarters without one.

The Falcons (4-8) got the ball back and again pushed deep into New Orleans territory. On second-and-2 at the Saints 13, Todd Gurley was stuffed for no gain. He got the ball again on third down for a sweep around the left end, but Demario Davis caught him for a 7-yard loss.

Ryan threw into the end zone on fourth down, but the pass fell incomplete to finish off the home team’s best chance at pulling off an upset. Atlanta got a desperation heave on the final play of the game, but it was batted it down. 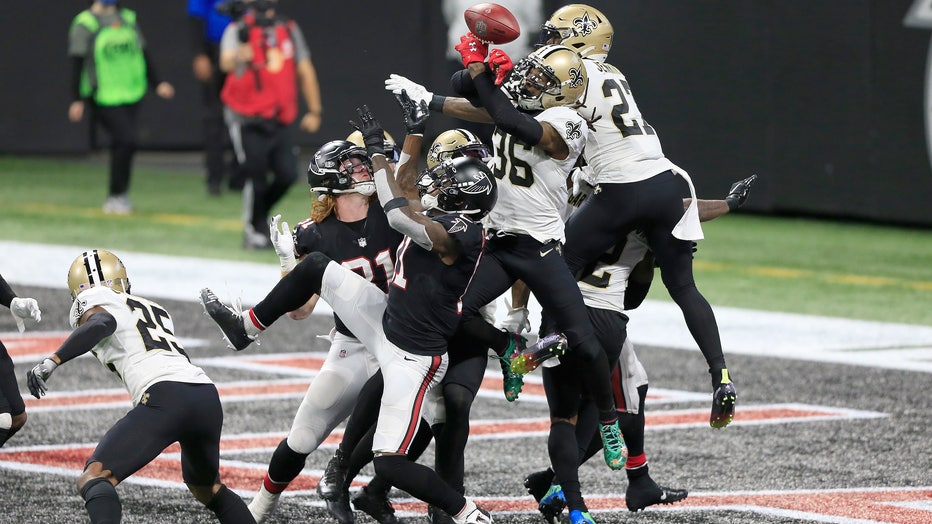 ATLANTA, GA - DECEMBER 06: Both teams scramble to catch the hail mary pass in the endzone during the week 13 NFL football game between the Atlanta Falcons and the New Orleans Saints on December 06, 2020 at the Mercedes-Benz Stadium in Atlanta, Georgi

The Saints never doubted their ability to prevent a second TD.

“We like us,” defensive end Cam Jordan said. “If we’re defending a touchdown, we love us.”

New Orleans extended the lead to 21-9 on Alvin Kamara’s 11-yard TD run in the third quarter and had a chance to wrap it up after Ryan fumbled on a play that was initially ruled an incompletion but changed to a fumble after Payton challenged the call.

Hill gave it right back. Under heavy pressure, he tried to throw the ball away but wound up fumbling, giving the Falcons renewed hope.

“It’s one of those things where I’m trying to make a play,” Hill said. “In hindsight, I wish I had just taken the sack and gotten a field goal. Those would’ve been big points for us.”

Ryan was 19 of 39 for 273 yards. He was sacked three times — a far cry from the combined 17 times he went down in the last two games against the Saints.

Still, Ryan faced heavy pressure much of the game, getting hit eight times. The running game wasn’t much help, managing just 70 yards and 3.3 yards per carry. Gurley, coming back from a knee injury, was held to 16 yards on eight carries.

“They’re a good defense, that’s for sure,” Ryan said. “We needed to be in more third-and-shorts to give us better opportunities.”

Younghoe Koo kicked three field goals for the Falcons, extending his streak to 24 in a row since his lone miss of the season in Week 3.

New Orleans swept the season series with the Falcons, winning 24-9 two weeks ago at the Superdome in Hill’s first career start.

The Saints are now 8-0 over the last two seasons when Brees isn’t able to play.

“That’s the position everyone focuses on, but our team’s playing well,” Payton said. “We’re fortunate to have depth at a number of positions, and that includes quarterback.”

He surpassed the mark shared by Anquan Boldin and Julio Jones, who reached 500 catches in 80 games.

Saints: CB Patrick Robinson left in the first half with a leg injury and did not return, leaving New Orleans shorthanded at that position. Robinson was starting in place of Janoris Jenkins, who missed the game with a knee injury.

When Robinson went down, P.J. Williams moved over from safety to fill the spot. “P.J. always does the job when he comes in,” safety Marcus Williams said. “He’s like a Swiss army knife.”

Falcons: S Riccardo Allen was done for the day after sustaining a concussion in the second half.

DE Jacob Tuioti-Mariner went out late in the game with a neck injury.

Falcons: Head to Los Angeles on Sunday to face the Chargers.