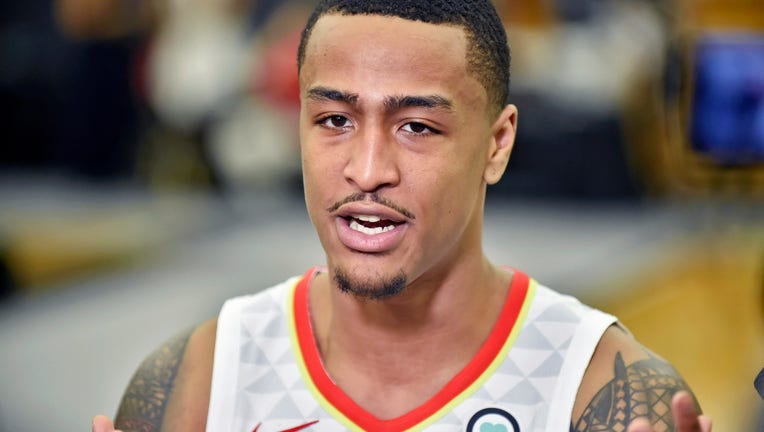 ATLANTA - Atlanta Hawks forward John Collins has been suspended without pay for 25 games.

Collins issued a statement to FOX 5 regarding the suspension.

"First I want to apologize to my teammates, the Hawks organization, our fans, partners and community as a whole for this situation. I understand the impact this matter has on what we are trying to achieve together this season, and I am incredibly frustrated and disappointed in myself for putting all us in this position. I have always been incredibly careful about what I put in my body, but I took a supplement, which unbeknownst to me, had been contaminated with an illegal component. I plan to appeal my suspension."

"That's the information that we'll eventually find out, the specifics of it. I'm sure it's a long process of how all this stuff happens," said head coach Lloyd Pierce. "John missed 15 or 20 games last year (in a) different situation obviously, but it's just part of the sport. We're not going to hang our hat on who's not here. We've got to worry about who is here."

In a statement to FOX 5, Schlenk said the team was diappointed that Collins put himself in "an unfortunate situation."

In his statement, Schlenk said, "We hold ourselves and each of our players to a high standard, and we are committed to supporting John as he learns from this setback and continues to grow as both a player and a person. Head Coach Lloyd Pierce and I have both talked to him and we believe that he is truly remorseful for his actions. We will provide John with support on and off the court while we look forward to his return to the team.”

Collins said he plans to fight the suspension in arbitration.

The suspension starts with Tuesday night's game against the San Antonio Spurs.

If the suspension holds, Collins would be eligible to return Dec. 23 against the Cavaliers in Cleveland.