LOS ANGELES - The finish line of the 2020 MLS regular season is in sight, and just like any great race, it’s all about getting that final burst of speed and getting your nose in front of as many rivals as possible. There are battles in both conferences for the final playoff spots, for home-field advantage, and to avoid certain opponents in the first round. While FS1’s focus will be on Central Florida Wednesday night, we’ll be cutting around to as many as seven other games to keep fans up to date with every goal and what it all means to the standings.

Even after their eye-opening run to the final of the MLS Is Back Tournament this summer, it was really Orlando’s win in Atlanta late in August that got everyone’s attention: the first time they’d beaten their Southeastern rivals in nine tries, and part of what became a club-record 12 game, two-month-long unbeaten run. Well, that run ended over the weekend, so how do the Lions react now? Quietly hidden in that undefeated streak were more ties than wins in recent weeks, and all of a sudden, it’s less a question of whether Orlando can challenge the top of the league, as whether they can guarantee a home playoff game? 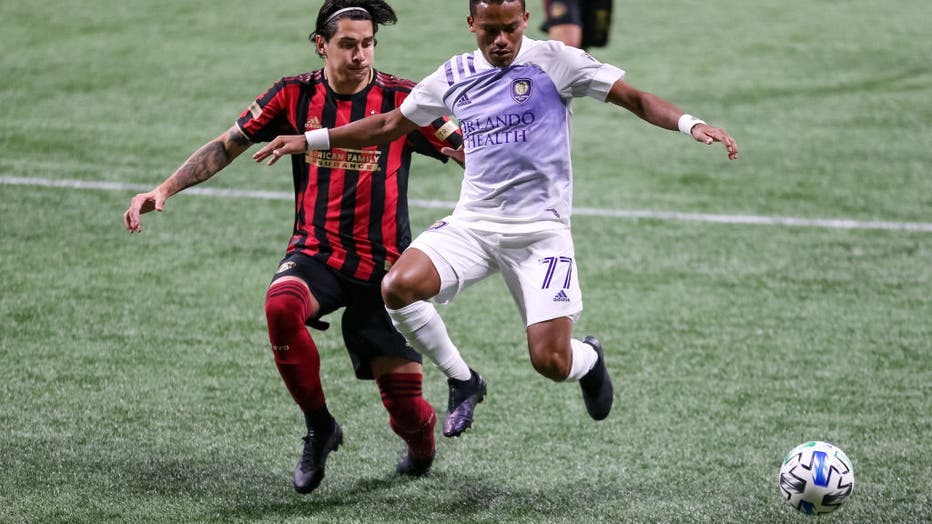 Franco Escobar #2 of Atlanta United battles Robinho #77 of Orlando City for ball control during the second half of a game at Mercedes-Benz Stadium on October 7, 2020 in Atlanta, Georgia. (Photo by Carmen Mandato/Getty Images)

Atlanta would take those kinds of “problems” in a heartbeat right now: one of the best teams MLS has ever seen over their first three years in the league is scrambling just to make the postseason right now. Injuries, a coaching change, even players talking about mentality and confidence; it’s all conspired to sink Atlanta United to 12th place in the Eastern Conference, two points below the playoff line with three games to go. New Designated Player Marcelino Moreno has provided an offensive spark in recent games, however, and what better way to keep your season alive than to make the misery for your rivals worse?

The Union are coming off maybe the most surprising result of the entire MLS season: not that they beat Toronto FC in a battle of teams atop the Supporters Shield standings, but that they did 5-0 behind a Sergio Santos hat trick. The Union are now ahead of Toronto on a tiebreaker, and three games away from winning that Supporters Shield as regular season champions, which would be the first trophy in team history.

Chicago, meanwhile, are the last team left out of the postseason at the moment, tied on points with Inter Miami for the 10th and final playoff spot, but beneath the expansion team on the tiebreaker. However, they have one more game to play this season than Miami do, with a busy two weeks ahead. Tough as it will be to walk into Philly and get a result, they might need it to make the playoffs in their first season back at Soldier Field.

While Toronto might be coming off that 5-0 loss in Philadelphia and have lost their pole position for the Supporters Shield, they’re hoping it’s just a blip on the radar: still battling injuries, after going home for a few days to visit family—Canadian government regulations mean they’re based in East Hartford, CT right now—and let’s not forget this team has played in three of the last four MLS Cups. And in two of those playoff runs, who did they knock off? New York City.

The Pigeons, as Alexi Lalas gets great delight calling them, have just recently returned home to playing games at Yankee Stadium, and they have a chance to make sure they’ll be in The Bronx in the playoffs too: just two points back of Orlando for the 4th seed in the East, which comes with it a home game in the first round. Also, a little bit of revenge for the team that ended their 2019 season would be nice.