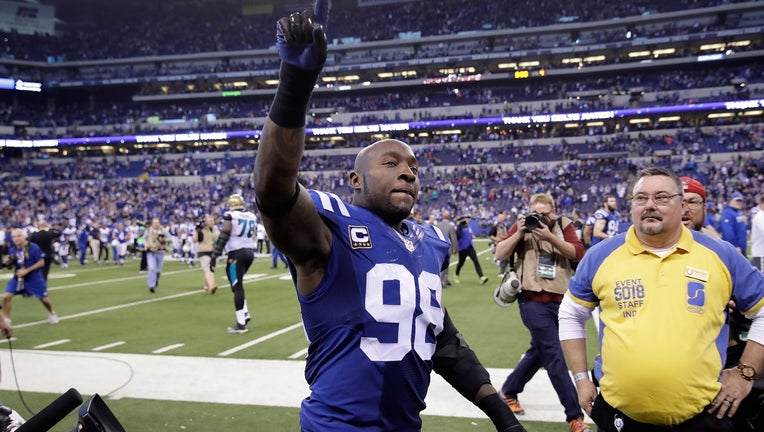 Robert Mathis #98 of the Indianapolis Colts waves to the crowd after the game against the Jacksonville Jaguars at Lucas Oil Stadium on January 1, 2017 in Indianapolis, Indiana. (Photo by Andy Lyons/Getty Images)

INDIANAPOLIS - The Indianapolis Colts will add career sacks leader Robert Mathis to their Ring of Honor this year. Mathis went to McNair High School in Atlanta.

The team announced Monday the induction ceremony will take place Nov. 22 when the Colts host the Green Bay Packers.

Mathis played his entire 14-season NFL career in Indianapolis and was best known for his chop to jar balls loose from quarterbacks. He finished his career with a franchise-record 123 sacks, 17th all-time, and a league-record 47 strip sacks. He was the inaugural Deacon Jones Award winner in 2013 and was named an All-Pro that season after leading the NFL with 19 1/2 sacks.

"From a fifth-round pick from a small college to one of the most effective and feared defensive players in the NFL, Robert Mathis was a centerpiece of the historic Colts teams of the last two decades," Colts owner Jim Irsay said in a statement. "He was undersized and underrated, but he made up for it with a motor that wouldn't quit and a flawless technique that outmatched the most talented lineman in the league. And to watch him strip-sack the quarterback -- which he did better and more than anyone in NFL history -- was a thing of beauty."

Mathis played most of his career opposite longtime friend Dwight Freeney, the most recent Ring of Honor inductee, and was selected to six Pro Bowls. He won two AFC titles, earned one Super Bowl ring and was selected the team's 2011 Ed Block Courage Award.

Mathis, who played his college ball at Alabama A&M, retired following the 2016 season but returned to the Colts as a consultant and assistant coach.

He will be the 17th inductee, joining six former teammates, Hall of Fame coach Tony Dungy and president/general manager Bill Polian, who traded up to get Mathis in the 2003 draft.