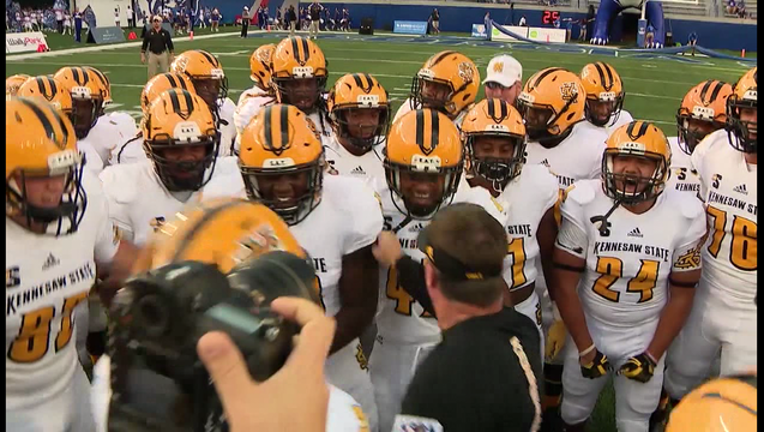 ATLANTA (AP) - Darnell Holland scored on a 13-yard run in the fifth overtime before Bryson Armstrong ended the marathon with an interception and Kennesaw State edged Jacksonville State 60-52 on Saturday in a meeting of FCS powerhouses at SunTrust Park, home of the Atlanta Braves.

Chandler Burks' 1-yard touchdown to tie the game at 24 with 1:25 left in regulation came on a 12-play drive after a 45-yard Jacksonville State field-goal attempt came up short with over six minutes left.

Burks had TD runs in the second and fourth overtimes and a 25-yard scoring pass to TJ Reed in the third. In the process, Burks broke the FCS record for rushing touchdowns by a quarterback in a season with 29. Holland finished with 101 yards rushing.

The Owls (10-1), ranked second in the coaches poll and champions of the Big South, won their 10th straight game with their victory over the seventh-ranked Gamecocks (8-3), the Ohio Valley champs.

Zerrick Cooper was 32 of 52 for 417 yards passing and four touchdowns, giving him a school-record 27 TD passes this season. Both quarterbacks were intercepted twice. Trae Berry had 115 yards receiving and Jamari Hester added 109 with two scores for Jacksonville State.