ATLANTA -  Deion Jones took off the other way, raising the ball in the air long before he got to the end zone.

Derek Carr watched the pick-six unfold from his knees, slamming the turf in disgust after another dreadful mistake.

It was the best of days for Jones and the Atlanta Falcons.

It couldn’t get much worse for Carr and the Las Vegas Raiders.

Jones returned an interception 67 yards for a touchdown, Matt Ryan threw a pair of short scoring passes, and the Atlanta Falcons thoroughly dominated Carr and the bumbling Raiders 43-6 on Sunday. 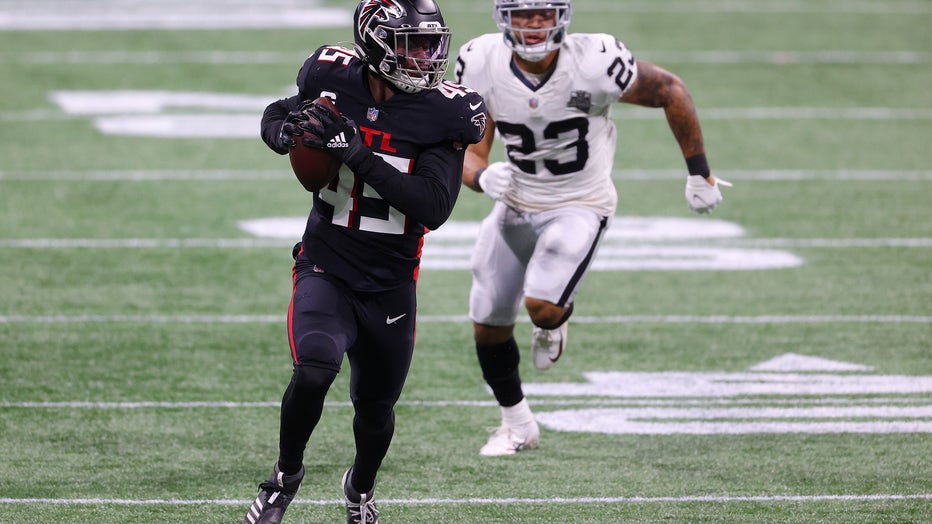 ATLANTA, GEORGIA - NOVEMBER 29: Deion Jones #45 of the Atlanta Falcons runs after intercepting a pass by Derek Carr #4 of the Las Vegas Raiders for a touchdown during their NFL game at Mercedes-Benz Stadium on November 29, 2020 in Atlanta, Georgia. (

Las Vegas (6-5) looked very much like a pretender in the AFC playoff race with its second straight loss, a listless, mistake-filled performance against an Atlanta team that’s playing out the season under an interim coach.

“The guys needed a little bit of what I call a push in the head,” said coach Raheem Morris, who improved to 4-2 since taking over for the fired Dan Quinn. “If you can get the guys to believe in themselves, believe in what they can do, those things usually work out in your favor.”

The Raiders took their worst loss of Jon Gruden’s most recent three seasons as coach.

“I apologize to the Raider nation and really compliment the Falcons,” Gruden said. “They played a hell of a football game and we did not.”

Carr had a miserable day, fumbling the ball away three times in addition to delivering the pick that Jones returned for his fifth career TD. Nathan Peterman finished out the game at quarterback while Carr watched from the bench, a pained look on his face.

“When you turn the ball over like that, you’re not going to win many games,” Carr said. “It’s a gut punch for sure.”

In addition to the season-high for turnovers, the Raiders were flagged 11 times for 141 yards. A facemask penalty wiped out an interception. A roughing-the-kicker call allowed the Falcons to keep the ball after a missed field goal — and they wound up scoring the game’s first touchdown.

Gambling on fourth-and-3 at the Raiders 4, Ryan double-pumped to buy just enough time to find Calvin Ridley alone in the back of the end zone with 2:17 left in a tedious first half that took nearly two hours to complete.

Ryan, who was 22 of 39 for 185 yards, added another 4-yard touchdown pass late in the third quarter, this one to Brandon Powell.

Ito Smith tacked on an 8-yard TD run after another Carr turnover, this one when Steven Means shoved left tackle Kolton Miller into his own quarterback, causing the ball to slip out of Carr’s hand just before his arm went forward for a throw.

“The defense put us in a lot of good positions,” Ryan said. “That’s the story of the day.”

Atlanta led 16-3 at halftime, and Jones sealed the game early in the third quarter.

Carr was swarmed by the pass rush and threw behind running back Devontae Booker on a short pass over the middle. The ball went right to Jones, who streaked all the way to the end zone with no one even close.

Carr’s first two fumbles were both recovered by third-string defensive end Jacob Tuioti-Mariner. He showed exceptional athleticism on the second one, knocking it away from Carr and then scrambling to fall on the loose ball.

“It was a good feeling to be out there flying around with each other,” Tuioti-Mariner said.

The Raiders were held to a pair of field goals from Daniel Carlson. Las Vegas managed 243 yards and 13 first downs.

With Todd Gurley sidelined by a knee injury, Smith finished with 65 yards on 12 carries, scoring his first touchdown since a severe concussion and neck injury caused him to miss the final nine games of the 2019 season.

Koo has now made 21 in a row, though he did catch a break with a 40-yard miss was wiped out by the roughing penalty.

Falcons: Take on first-place New Orleans for the second time in three weeks, hosting their NFC South rival next Sunday. The Saints won the first meeting 24-9.