NEW ORLEANS, La. - Driving accurate throws downfield, exhibiting poise in the pocket and scrambling judiciously, Taysom Hill capitalized on his first true opportunity to make his case as a candidate to one day succeed record-setting star Drew Brees as the Saints quarterback.

Hill rushed for two touchdowns and completed 78.3% of his passes for 233 yards in his first NFL start at quarterback, and New Orleans beat the Atlanta Falcons 24-9 on Sunday to extend its winning streak to seven games.

"Man, he played tremendous," said Saints receiver Michael Thomas, who caught nine passes for 104 yards. "I could see the look in his eyes. He was ready for the moment."

The decision meant a lot to Hill, who persevered through an injury-plagued college career at BYU before starting his NFL career as a 27-year-old undrafted rookie in 2017. And because Hill initially flourished in an unconventional utility role, with duties ranging from change-of-pace option QB to tight end and special teams, he played in 46 previous NFL games before finally getting his first start under center.

"I spent a lot of time reflecting this week. My wife and I had so many conversations about were we've been, the process of getting here," Hill said. "If I'm being honest, it was an emotional week."

Hill looked comfortable running the scheme Payton designed for him. He completed 18 of 23 passes without an interception and used his all-around athleticism to run intermittently on scrambles or designed read-option plays, finishing with a team-high 51 yards rushing. The biggest blemish in his performance was an inconsequential, fourth-quarter fumble after a 20-yard run to the Atlanta 22.

Still, he had a better day than Atlanta quarterback Matt Ryan, who was sacked eight times and finished 19-of-37 passing for 232 yards, no touchdowns and two interceptions to defensive backs Marcus Williams and Janoris Jenkins. Cameron Jordan sacked Ryan three times, while Trey Hendrickson and David Onyemata each had two sacks. 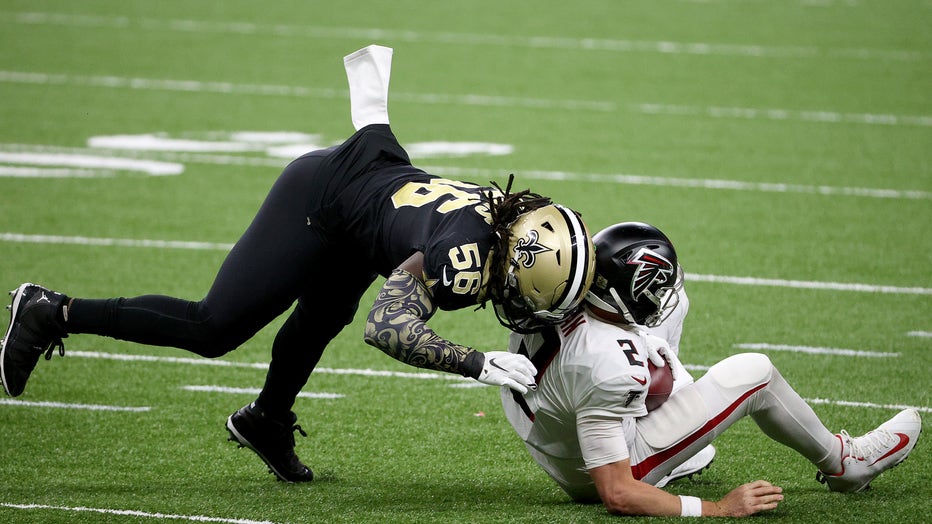 NEW ORLEANS, LOUISIANA - NOVEMBER 22: Matt Ryan #2 of the Atlanta Falcons is sacked by Demario Davis #56 of the New Orleans Saints in the third quarter at Mercedes-Benz Superdome on November 22, 2020 in New Orleans, Louisiana. (Photo by Chris Graythe

Hill entered having thrown just five passes with four completions for 86 yards this season and was 10 of 18 for 205 yards in his career, leaving him relatively unproven as a passer.

Not anymore. While his all-around athleticism would have made scrambling a tempting default choice, he regularly showed patience and poise while delivering accurate passes moments before impact from onrushing defenders.

"I always know that I have the ability, if things break down, that I can make a play," Hill said. "But my mindset was: let's keep your eyes down the field and let's find opportunities" for receivers.

Hill was among the last to leave the field after the game, raising one hand to acknowledge cheers of the pandemic-limited crowd of about 6,000.

All that was missing was a first-career scoring pass -- partly because of how effectively the Saints ran the ball. Alvin Kamara scored New Orleans' first TD on a 3-yard run, Hill scored the second on a keeper on fourth down from the Atlanta 2, and Hill's second TD came on a 10-yard scramble.

Kamara, Hill and Latavius Murray powered a ground game that netted 168 yards, which helped the Saints (8-2) sustain drives that consumed a total of 33:41.

New Orleans' second-ranked run defense held Atlanta to 52 yards rushing, and the Saints defense did not allow a touchdown for the second time in three games -- with only one touchdown given up in between.

The Falcons (3-7) struck first with a field goal set up by Ryan's 46-yard completion to Calvin Ridley and led 9-3 on three Younghoe Koo kicks before the Saints responded with 21 straight points.

Kamara became the first player in NFL history with at least 500 yards rushing and receiving in each of his first four NFL seasons.

Thomas recorded his 482nd career catch during the first half, giving him ownership of the record for most catches in an NFL player's first five seasons. He finished the game with 489.

Falcons: Linebacker Mykal Walker limped off in the second quarter favoring his left hamstring. Linebacker Foyesade Oluokun was treated on the field and walked to the sidelined in the fourth quarter. Receiver Julio Jones saw limited action because of hamstring tightness and made two catches for 39 yards.

Saints: Left guard Andrus Peat left with a concussion and Deonte Harris left with a stinger, both in the first half.