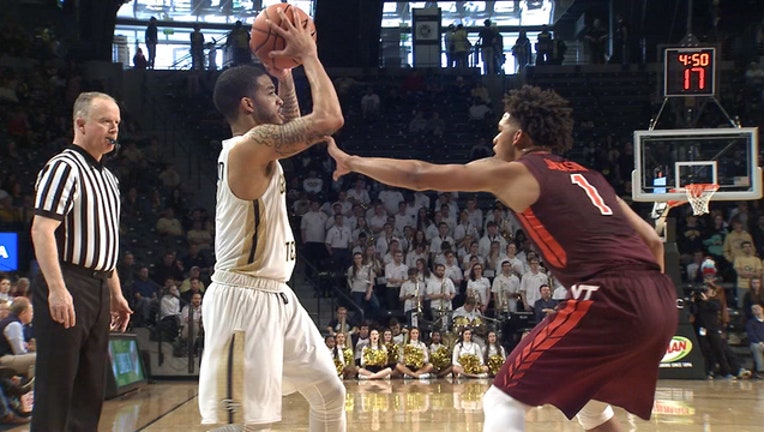 ATLANTA - Though it was a sell-out crowd at McCamish Pavilion, it was not hard to find the Jackson family.

Jackson was elated to watch her two sons face off on the hardwood: Georgia Tech senior Tadric Jackson and Virginia Tech redshirt freshman Tyrie Jackson. Three busloads of fans made the trip from Tifton County in South Georgia to cheer on their hometown stars. The group included about 30 relatives of Tadric and Tyrie, many of whom sporting matching t-shirts.

After the game, Tadric was not feeling too sentimental, maybe in part because his younger brother's team picked up a 20-point win.

Tadric Jackson scored 17 points while Tyrie had 6. Virginia Tech freshman PJ Horne also went to Tift County High School, so he heard plenty of cheers as well. While one of the Jackson brothers gets bragging rights, the family says they'll remember the day for more than the final score. With Tadric a senior and Tyrie a redshirt freshman, this may well be the only time the brothers play against one another.

"I'm very blessed," said Natasha Jackson. "I thank God. God's been a very important part of this. I can't express the way I feel. I'm overjoyed. It can't get better than this."

Tadric Jackson and Georgia Tech are currently on a five-game losing streak. They are back in action Wednesday at top-ranked Virginia.