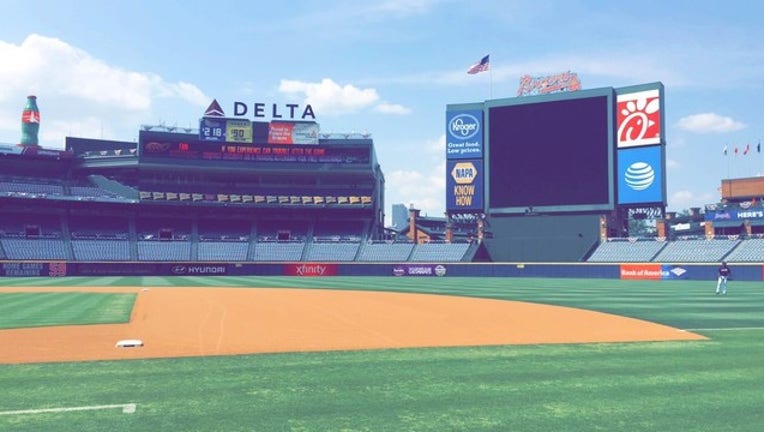 It's days like these when reporters are truly tested.

Sports journalism is not for the faint hearted. If you think you have a solidified plan for the day, you would be wrong. Instead of forcing 'Plan A' to work, journalists knowingly have a 'Plan Z' for when things change all too quickly.

Which is what happened on May 27.

This was the day that the Snapchat "foxfivesports" was scheduled to launch. I wanted to wait for the perfect day to showcase the account so that viewers could get a fast-paced taste of what Fox 5 Sports does.

As planned, the FOX 5 crew had visited the Atlanta Braves and the Mexican national soccer team. The original plan was to interview Braves' Gordon Beckham in the locker room, grab some footage of the 5 p.m. batting practice, and then quickly interview the Mexican national team coach Juan Carlos Osorio at Emory University.

But FOX 5 never got the chance to interview Beckham. He was in the midst of an intense work out session and didn't have enough time for interviews before the team's warm up exercises would commence.   This is the kind of obstacle that remains a constant factor in sports media. A reporter may not always get the athlete they want to interview or film they want to showcase. In fact, it is almost expected that 'Plan A' would not work out just in case something goes wrong.

Instead of throwing in the towel, FOX 5 Sports rallied. Our cameraman, Blaine Kummet, extracted some interviews from other players in the locker room while I Snapchatted anything in near sight at Turner Field.

It was around 5 p.m. when Kummet and I cut our losses, hopped into the FOX 5 van, and battled Friday afternoon traffic to observe the national team's practice at Emory University. With the editor in tow, it seemed like the most difficult part of the day was behind us and we would be able to feed the footage from the day's events to the station in time for the show.

Except 'Plan A' for the soccer coverage didn't work out accordingly either.

The practice fields at Emory were a complete circus to say the least. Fans clamored on the outside of the fence, desperate to catch a glance of their favorite soccer players. The media was assigned badges and wrist-bracelets just to get inside. The bleachers that surrounded the soccer field were congested with people and cameras. I quickly Snapchatted the scenery, taking note of the chanting fans vying for attention.

The press conference was not scheduled for another 30 minutes after we arrived, but various media outlets decided to get a head start to the media room.

FOX 5 News was of no exception, but it still didn't make a difference.

Only a quarter of the reporters were present, but the small conference room in the Emory athletic headquarters was already crammed full. Most people made an effort to get their microphone as close to the podium as possible while the others attempted to set up their tripods near the back of the room. The air conditioning was running low and many struggled to stay cool.

By the time half of the reporters had arrived at the press conference, I made a move to wait outside in the hallway. A few other members of the media and the PR coordinators of the event followed suit as we waited for Osorio to show up.

Though Osorio began the press conference quickly, Kummet and I could not leave until the end as most of the interviews were conducted in Spanish. We needed footage in English so that those who viewed the press conference could understand what was going on.   Once we got the footage, we quickly drove back to the Fox 5 station, our destination time being 7:20 p.m. Though the day was unpredictable, there is a certain satisfaction that can be gained when everything works out. That aspect of journalism is an art that all reporters master starting with 'Plan A' and ending in 'Plan Z.'

Want to follow more of my adventures? Check out my social media accounts below.