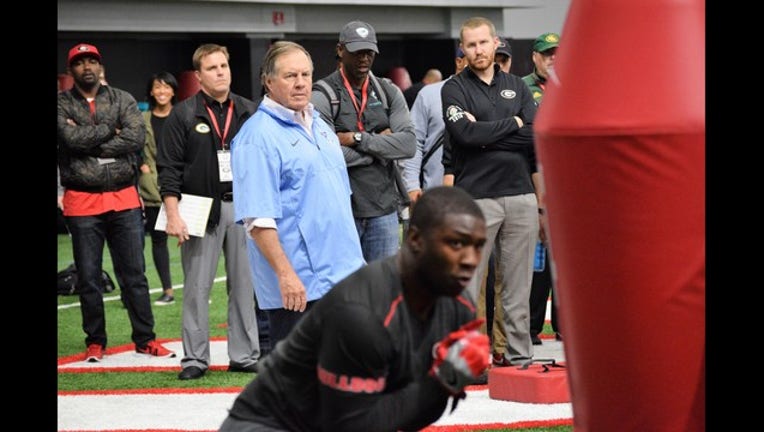 This was no time to be star-struck. Those linebacker drills, also organized by Lions coach Matt Patricia, were Carter's chance to validate his standing as a player expected to be selected in the first two days of next month's NFL draft.

Carter and Davin Bellamy showed off their versatility by participating in the linebacker and defensive line positional drills, hoping to prove they'd fit in 3-4 or 4-3 schemes in the NFL.

Georgia linebacker Roquan Smith , a probable first-round pick, said it was "pretty awesome" to perform for Belichick and Patricia, who he described as "pretty much legends of the game, doing it a long time and knowing what it takes to succeed at the next level."

Smith, the Butkus Award winner, said he has been invited to attend the draft in Arlington, Texas.

Wynn couldn't participate in drills because he is recovering from surgery to repair a torn labrum. He suffered the injury on Nov. 18 against Kentucky.

Wynn, who was the leader of Georgia's offensive line, said it was "kind of bittersweet not being able to perform" but added he enjoyed watching teammates "chasing their dream."

Dimitroff said he looks for more than bench press, vertical jump and broad jump results. He said he also considers other factors in his draft decisions.

"See how they handle their business," Dimitroff said. "That's a big thing. If they adhere to instruction properly. You like to see how they interact with the players, their teammates, as well, in the setting. See if they're cheering people on."

Dimitroff, who was the Patriots' director of college scouting before moving to the Falcons in 2008, said he knows coaches like Belichick and Quinn enjoy working with the draft prospects.

"That's what they thrive on," Dimitroff said. "They like to be back in there doing their stuff."