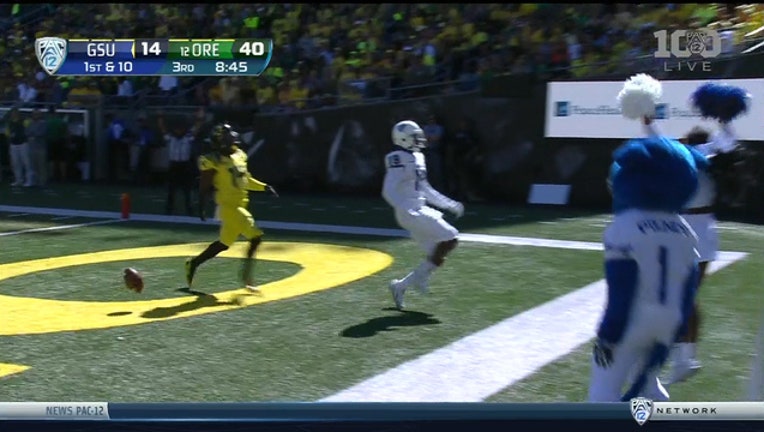 EUGENE, Ore. (AP) — Jeff Lockie was low-key about his first career start, satisfied that he helped his team win a game.

The backup for Marcus Mariota last season, Lockie stepped in for this year's starter Vernon Adams and threw for 228 yards and two touchdowns in No. 12 Oregon's 61-28 victory over Georgia State on Saturday.

"Just having my teammates' support going out there really helped me relax, just knowing that these guys have got my back," Lockie said.

Adams sat out with a broken index finger on his throwing hand, which he said had bothered him late in the Ducks' loss last weekend to Michigan State.

Last season, Lockie completed 21 of 28 passes for 207 yards and a touchdown, playing off the bench for Oregon's Heisman Trophy winner. He competed for the starting quarterback job in fall camp with Adams, a senior transfer who arrived late because he needed to complete his degree at Eastern Washington.

Although Adams insisted he could play and he was dressed for the game, the decision to sit him gives him a chance to heal before next week's Pac-12 Conference opener against No. 21 Utah.

Lockie, a junior, completed 23 of 31 passes without an interception.

"I'm just going out there and we're trying to win. I think if you ask Vernon, if you ask coach (Mark) Helfrich, I don't think anyone really truly cares who's out there as long as we're winning games," Lockie said.

Royce Freeman ran for 101 yards and a touchdown for the Ducks (2-1), who rebounded from last weekend's loss at Michigan State. Aidan Schneider added four field goals, all in the first half as Oregon built a 33-7 lead.

Nick Arbuckle threw for 318 yards and three touchdowns, and freshman Penny Hart had nine catches for 128 yards for the Panthers (1-2), who were more than six-touchdown underdogs at Autzen Stadium. Georgia State was hurt by turnovers, including a pair of Oregon touchdowns off an interception and a fumble.

"Give all the credit to Oregon, they did a great job, but when you're playing a team of their caliber and you hand it to them on a silver platter, it doesn't help your cause," Georgia State coach Trent Miles said.

Oregon jumped ahead on Tyree Robinson's 43-yard interception return with just over a minute off the clock. It was the sophomore safety's first career touchdown.

Oregon's secondary had trouble slowing down Hart, who caught four passes for 90 yards in the first quarter. His 44-yard reception highlighted a drive that was capped by Arbuckle's 1-yard TD keeper.

Freeman's 22-yard touchdown run and Lockie's 35-yard scoring pass to Dwayne Stanford extended the lead for the Ducks before Schneider hit consecutive 40-yard field goals to give Oregon a 33-7 lead at the half.

The two teams traded touchdowns in the third quarter.

Then Arbuckle hit Robert Davis, who eluded three defenders for a 75-yard touchdown to close the gap to 40-21. It was the longest scoring pass allowed by Oregon since 2013 against Colorado. But Oregon again answered, this time on Lockie's 11-yard scoring pass to Johnny Mundt that made it 47-21.

Arbuckle did it again with a 6-yard TD pass to Keith Rucker. But early in the fourth quarter he was sacked by Tyson Coleman and fumbled. The ball was scooped up by Joe Walker who ran 52 yards for the touchdown to give Oregon a 54-28 lead.

Arbuckle said afterward the Panthers had prepared to win. Georgia State, which plays Liberty next weekend, was paid $900,000 for the trip to Eugene.