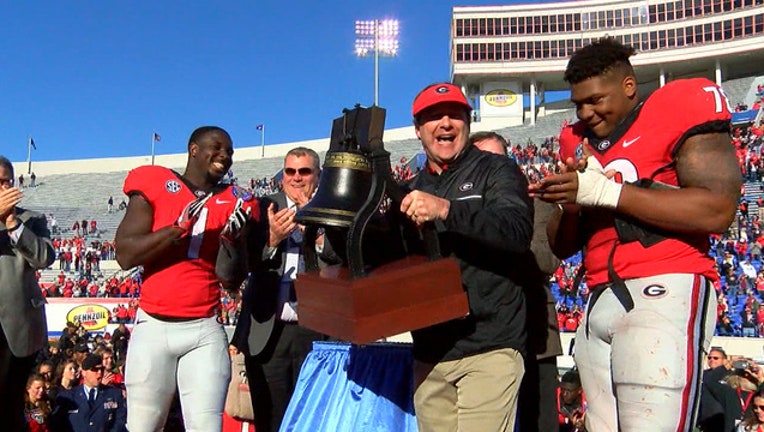 MEMPHIS, Tenn. - No matter how difficult it was to find running room early on, Georgia kept trying to establish its ground attack.

That stubborn approach eventually paid off.

Nick Chubb and Sony Michel combined to rush for 229 yards and two touchdowns Friday as Georgia came from behind in the fourth quarter to beat TCU 31-23 in the Liberty Bowl.

Chubb rushed for 142 yards and a touchdown on 17 carries, while Michel ran for 87 yards and a score on 16 attempts. Michel also had a 33-yard touchdown catch. The two juniors already have announced that they plan to return to school for their senior seasons.

Held in check for much of the game, Chubb closed the third quarter with a 48-yard burst that set up Rodrigo Blankenship's field goal to put Georgia ahead 24-23 with 13:27 left. Chubb then rushed for 57 yards in the final period, including a 13-yard touchdown with 2:48 remaining.

Georgia (8-5) restored some pride to the Southeastern Conference. The SEC had entered the day with a 1-4 bowl record, a major step back for a league that went 9-2 in bowl games last year to set a record for bowl victories.

The Bulldogs also sent TCU (6-7) to only its third losing year in Gary Patterson's 16 full seasons as coach. Missed opportunities proved costly for the Horned Frogs, who led 16-7 in the first half and carried a 23-21 advantage into the fourth quarter.

"It was a game that we could have easily won, but you've got to make plays," Patterson said. "For us, it's kind of been the story of our season."

Brandon Hatfield was wide right on a 47-yard field goal attempt that would have put TCU ahead with 7:57 remaining. He earlier had missed an extra point attempt as well as a 41-yard field goal.

Both of Hatfield's missed field goals came after Trenton Thompson sacked Kenny Hill in third-down situations. Thompson set a Liberty Bowl record with three sacks and was named the game's most valuable player.

After Hatfield missed his 47-yarder, Georgia went on a 70-yard touchdown drive to extend its lead to 31-23. Deandre Baker clinched the victory by breaking up Hill's fourth-and-4 pass from the Georgia 44 with 1:14 remaining.

Hill threw a pair of touchdown passes to John Diarse and also ran for a third score, but he was sacked five times and lost a fumble. Georgia's Jacob Eason was 12 of 21 for 164 yards with two touchdown passes.

Georgia: The Bulldogs established themselves as potential SEC Eastern Division favorites next season, assuming Eason improves in his sophomore year. Chubb and Michel should form one of the nation's top running back tandems next season, and Georgia figures to have a quality defense.

TCU: The Horned Frogs end up with a rare losing season, but Hill's gutty performance offers at least some cause for optimism. Hill struggled with consistency all season but kept TCU in the game Friday as he eluded pressure while playing with a bad ankle.

Georgia wide receiver Isaiah McKenzie announced after the game that he's passing up his senior season to enter the NFL draft. McKenzie had four catches for 103 yards, including a 77-yarder that set up a touchdown.

Chubb's 142-yard rushing performance increased his career total to 3,424 and made him the second-leading rusher in Georgia history. Chubb overtook Los Angeles Rams running back Todd Gurley, who rushed for 3,285 yards in his college career.