ATHENS, Ga. - Israel Mukuamu returned the first of his three interceptions 53 yards for a touchdown and South Carolina took advantage of Jake Fromm's four turnovers to beat No. 3 Georgia 17-10 in double overtime on Saturday.

Parker White's 23-yard field goal in the second overtime proved to be enough when Georgia's Rodrigo Blankenship was wide left on his attempt from 42 yards. Blankenship's second miss of the game sent South Carolina players charging onto the field to celebrate the upset. 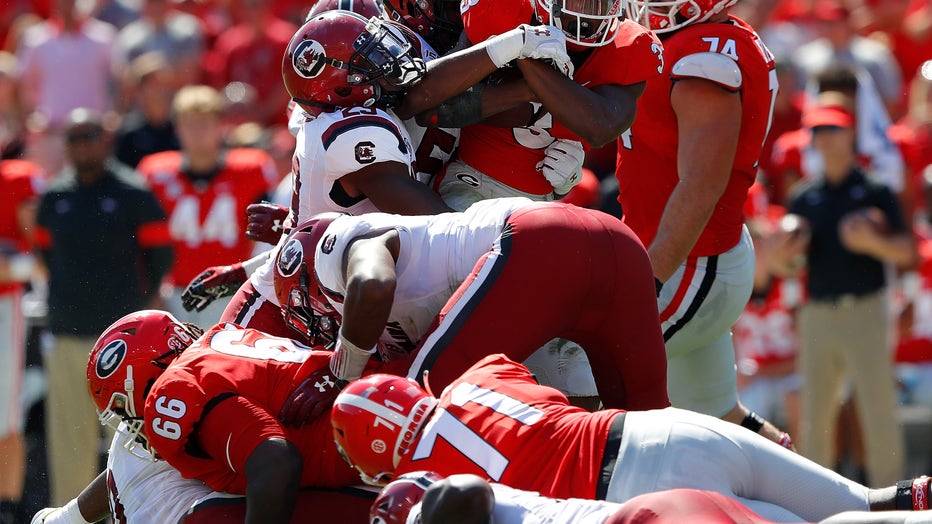 Zamir White of the Georgia Bulldogs is tackled and pushed backward by J.T. Ibe #29 and Ernest Jones #53 of the South Carolina Gamecocks in the first half at Sanford Stadium. (Kevin C. Cox/Getty Images)

Georgia (5-1, 2-1 Southeastern Conference) suffered a big hit to its national championship hopes. The Bulldogs, favored by 24½ points, could not overcome three interceptions and a lost fumble by Fromm, the senior quarterback known for avoiding mistakes. Fromm did not throw an interception in the Bulldogs' first five games.

On the second play of overtime, Fromm's pass glanced off the hands of receiver Tyler Simmons and was intercepted by Mukuamu. White's 33-yard field-goal attempt missed wide right to keep the game alive.

Fromm led Georgia on a tying 96-yard touchdown drive capped by his 6-yard scoring pass to Demetris Robertson with less than two minutes remaining in regulation.

White, who made a 49-yard field goal in the first half, missed a 57-yarder with 40 seconds remaining to give the Bulldogs one final possession in regulation.

Fromm moved the Bulldogs to the South Carolina 38, in possible position for Blankenship to attempt a game-winning field goal. But an illegal shift penalty pushed Georgia back five yards, ending the field-goal possibility as regulation ended.

South Carolina (3-3, 2-2) took its first win over a ranked opponent since beating No. 18 Tennessee in 2016. It was an important signature win for coach Will Muschamp over his alma mater.

The Gamecocks won despite losing quarterback Ryan Hilinski to an apparent knee injury.

Hilinski completed 15 of 20 passes for 116 yards and a touchdown before leaving the game after a late hit in the third quarter. Georgia linebacker Adam Anderson was penalized for roughing the passer.

Fromm threw no interceptions on 111 passes through five games, but his first giveaway in the second quarter was costly.

Pressure from the South Carolina defense forced Fromm to attempt a pass off his back foot. The floater from Fromm, intended for George Pickens, was intercepted by Mukuamu, whose 53-yard return gave the Gamecocks the lead.

With Georgia driving for a potential tying touchdown, Fromm fumbled the first snap of the fourth quarter. T.J. Brunson recovered for the Gamecocks at the South Carolina 29.

The Gamecocks' 17-10 lead held when senior Rodrigo Blankenship's 53-yard field goal attempt on the last play of the half was deflected by D.J. Wonnum. It was Blankenship's first miss of the season.

Hilinski, the freshman from Orange, California, who was recruited by Georgia, enjoyed a strong first half, completing 13 of 16 passes. Hilinski's 46-yard touchdown pass to Bryan Edwards in the first quarter gave the Gamecocks a 7-3 lead.

D'Andre Swift had a 1-yard scoring run early in the second quarter.