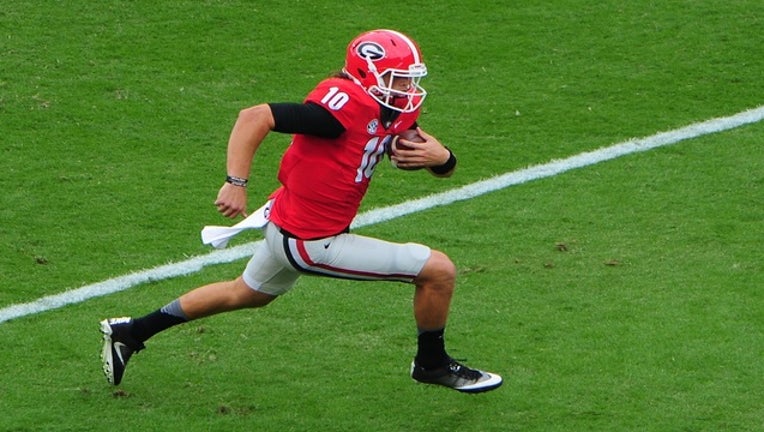 Nick Chubb ran for 96 yards, including scoring runs of 1 and 7 yards. Sony Michel added 87 yards rushing and a touchdown for Georgia in the opener for both teams.

Eason was injured on a late hit in the first quarter and needed help leaving the field.

Fromm threw a 34-yard scoring pass to Javon Wims for his second of three straight touchdown drives in the first half. Chubb and Michel gained momentum as an undersized defense for Appalachian State appeared to wear down.

Fromm wasn't assured of playing time in the game or even the season before Eason's injury. Coach Kirby Smart said this week he had no plan to create time for Fromm, adding "Jacob Eason is our quarterback."

That plan changed before all the fans could find their seats at Sanford Stadium.

With 6:30 remaining in the first quarter, Mountaineers defensive tackle Myquon Stout drew a personal foul penalty when he hit Eason late out of bounds. Eason limped back onto the field before collapsing behind the line of scrimmage.

Eason was helped to the sideline and then taken to the locker room. Georgia announced the sophomore was out "for now" and provided no immediate update on the injury. Eason never returned to the sideline.

Appalachian State quarterback Taylor Lamb, who as a kid played on the Georgia practice fields when his grandfather, Ray Lamb, was Georgia's coordinator of high school relations, couldn't pull off a win in his return to Athens. Lamb, the son of Mercer coach Bobby Lamb, completed 18 of 27 passes for 128 yards and ran for 66 yards and a touchdown.

Fromm was out of the game when Mountaineers safety Desmond Franklin intercepted a pass from Tray Bishop. The turnover set up Lamb's 20-yard scoring run with less than 6 minutes remaining.

Appalachian State: The Mountaineers' small defensive line was strong early but appeared to wear down on a warm night, allowing touchdowns on three consecutive drives. Appalachian State, the preseason pick to win the SunBelt Conference, couldn't dent the Georgia defense until late in the game.

Georgia: The Bulldogs, held without a first down on two drives with Eason, found their momentum with Fromm. The Bulldogs built a 21-0 halftime lead. Coach Kirby Smart's trust in Fromm showed in the third quarter when the freshman completed a 21-yard pass to Wims on a fourth-and-3 play. It was Fromm's night, but Georgia's defense also excelled by allowing only 284 yards, helping the Bulldogs play up to their No. 15 preseason ranking.