MINNEAPOLIS - Julio Jones returned from injury to catch two of Matt Ryan’s four touchdown passes, as the Atlanta Falcons beat the Minnesota Vikings 40-23 on Sunday for their first victory of the season — one week after the firing of head coach Dan Quinn. 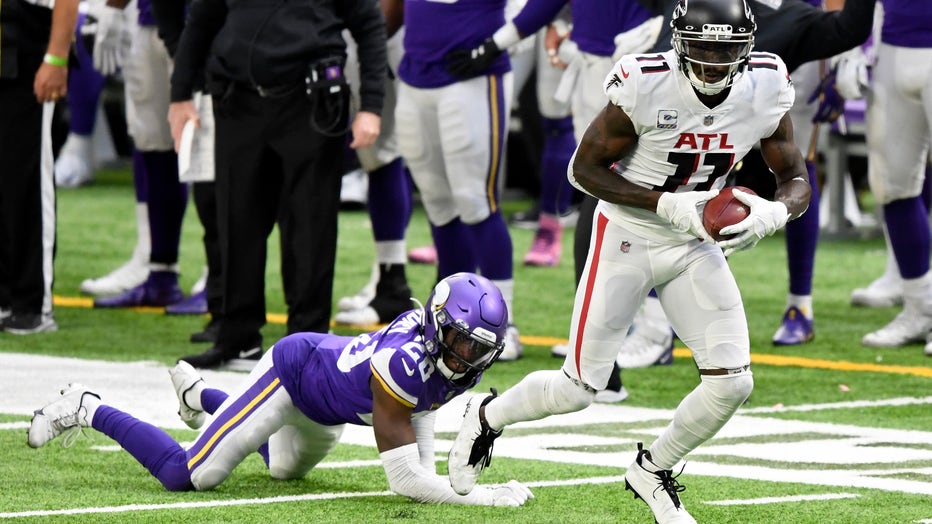 MINNEAPOLIS, MINNESOTA - OCTOBER 18: Julio Jones #11 of the Atlanta Falcons runs with the ball past Jeff Gladney #20 of the Minnesota Vikings in the third quarter at U.S. Bank Stadium on October 18, 2020 in Minneapolis, Minnesota. (Photo by Hannah Fo

Kirk Cousins threw three interceptions in the first half for the first time in his career, and the Falcons (1-5) turned those picks into 17 points to build a 20-0 lead at the break that proved to be solid enough for even this falter-prone team.

The depleted Vikings (1-5) surrendered 40-plus points for the second time this year after going five straight seasons without any such games. After another injury left them with only rookies available at cornerback for more than half of the game, Ryan completed 30 of 40 passes for 371 yards to rebound from a three-week stretch during which he only found the end zone once. 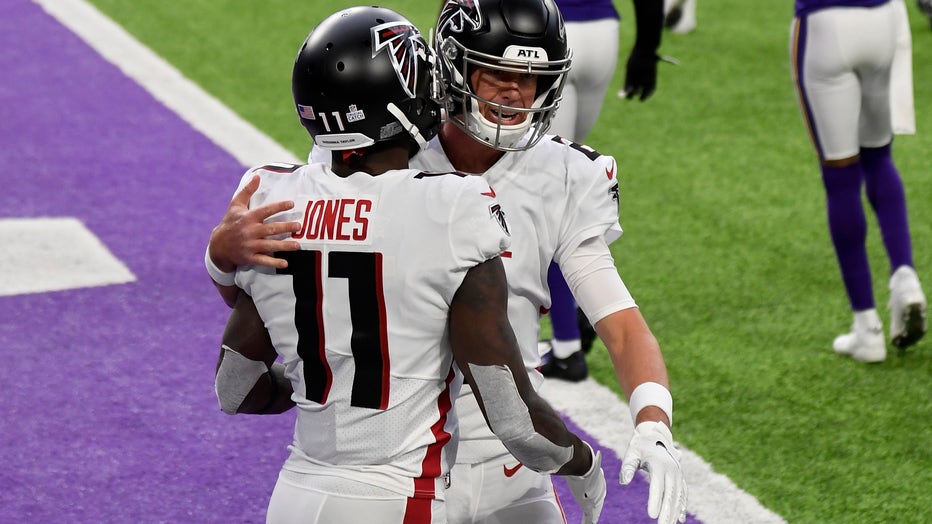 MINNEAPOLIS, MINNESOTA - OCTOBER 18: Julio Jones #11 and Matt Ryan #2 of the Atlanta Falcons celebrate after scoring a touchdown in the first quarter against the Minnesota Vikings at U.S. Bank Stadium on October 18, 2020 in Minneapolis, Minnesota. (P

Jones, who missed all but one half of the previous three games with hamstring trouble, had eight receptions for 137 yards.

Calvin Ridley and Hayden Hurt each chipped in a touchdown catch, Younghoe Koo kicked four field goals, and the Falcons rewarded interim coach Raheem Morris with a win in his debut after Quinn and general manager Thomas Dimitroff were dismissed less than four years after the infamous blown 28-3 lead in the Super Bowl.

The Falcons held a 15-point lead over Dallas and a 16-point advantage on Chicago earlier this season, both times past the midpoint of the fourth quarter, and lost both.

With a fresh start, the Falcons had little to lose and played like it from the opening kickoff with an obvious energy embodying the upbeat Morris. Linebackers coach Jeff Ulbrich was promoted to fill Morris’ defensive coordinator role, and the strategy was superb for a group that entered the game in the bottom five in the league in most of the major statistical categories.

Deion Jones picked off a dangerous into-a-crowd pass by Cousins for Justin Jefferson on Minnesota’s first play from scrimmage. A.J. Terrell, who returned from a two-week absence on the COVID-19 reserve list, snagged his first career interception, also intended for Jefferson. Foyesade Oluokun got one too in Atlanta’s first first-half shutout in 12 games since Nov. 17, 2019, against Carolina.

Cousins became the first Minnesota quarterback with three first-half interceptions since Daunte Culpepper on Dec. 1, 2002, also against Atlanta. With the NFL’s leading rusher, Dalvin Cook, out with a groin injury, the Vikings netted only 32 rushing yards after racking up 201 rushing yards in a 27-26 loss at Seattle the week before. Trailing 10-0 early in the second quarter, Mike Boone was stopped on fourth-and-goal from the 1.

Jefferson had nine receptions for 166 yards and two touchdowns. Cousins hit Adam Thielen for a fourth-quarter score, too, and finished 24 for 36 for 343 yards in meaningless catch-up mode.

Vikings: CB Mike Hughes (neck) departed in the second quarter with the injury that kept him out of two recent games, leaving the Vikings with only three available players at CB: rookie starters Jeff Gladney and Cameron Dantzler and backup Harrison Hand. CB Holton Hill (foot) was inactive for the second straight game.