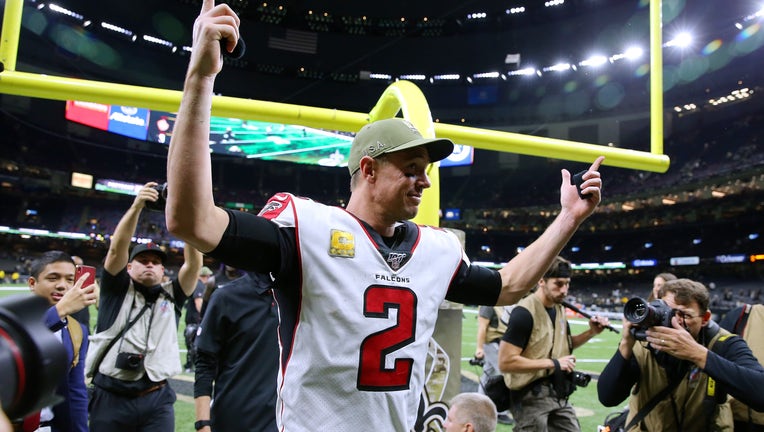 NEW ORLEANS, LOUISIANA - NOVEMBER 10: Matt Ryan #2 of the Atlanta Falcons celebrates after a game against the New Orleans Saints at the Mercedes Benz Superdome on November 10, 2019 in New Orleans, Louisiana. The Falcons won 26-9. (Photo by Jonathan B (Getty Images)

NEW ORLEANS - Matt Ryan passed for two touchdowns and the Atlanta Falcons ended their six-game slide with a 26-9 victory over the Saints on Sunday that stopped New Orleans' six-game winning streak.

It was the second time this season the Saints were held without a touchdown at home, but the first time with Brees under center. New Orleans also failed to score a TD in a 12-10 victory over Dallas in Week 4 with Teddy Bridgewater filling in at quarterback.

Ryan, returning from an ankle injury that sidelined him in the game before the Falcons' Week 9 bye, was 20 of 35 for 182 yards.

His first touchdown went for 8 yards to tight end Austin Hooper in the second quarter and his second to running back Brian Hill in the fourth quarter to put Atlanta in front 20-9.

Ryan was intercepted once inside the final five minutes by Marcus Williams, but the Saints offense quickly turned the ball back over on downs.

Julio Jones caught three passes for 79 yards -- including a 54-yarder to set up a field goal -- for Atlanta, which rolled up 317 yards and were the first Saints opponent since Seattle in Week 3 to gain more than 257 yards.

Brees went 32 of 45 for 287 yards and the Saints finished with 310 yards, well below their average of 375.3 coming in. That's despite getting running back Alvin Kamara and tight end Jared Cook back from injuries that had kept them out of New Orleans' previous two games. Other than receiver Michael Thomas, who caught 13 passes for 152 yards, few regulars on the Saints' offense approached their usual production.

The Saints also were mistake-prone, committing committed 12 penalties for 90 yards. Several of those infractions extended Atlanta drives on third and even fourth down.

With 9:01 left, J.T. Gray, who had blocked a punt in Chicago in Week 7, committed a 15-yard, roughing the kicker penalty trying to block another. The penalty led to Younghoe Koo's 48 yards field goal, which widened Atlanta's lead to 23-9 with 7:27 to go.

Falcons: Running back Devonta Freeman left with a foot injury. ... Defensive back Damontae Kazee was being treated after tackling Saints running back Latavius Murray in the third quarter. ... Hooper limped off early in the fourth quarter after being tackled by Demario Davis. ... Safety Kemal Ishmael received treatment on the field in the final minutes but was able to walk to the sideline.

Falcons: Visit Carolina on Sunday for the first matchup of the season between the NFC South foes.

Saints: Visit Tampa Bay on Sunday, looking for a season sweep of the Buccaneers.