ATLANTA - Two fourth-down plays on back-to-back possessions in the third quarter helped create a deficit that was too much for the Atlanta Falcons to overcome.

Now, in a crucial season for coach Dan Quinn, the Falcons already face a disturbingly familiar challenge. They know from recent history that bad starts can lead to bad finishes.

Sunday's 38-25 loss to Seattle left Atlanta 0-1 for the third straight season. Opening losses the last two years turned into devastatingly poor starts that kept the Falcons out of the playoffs.

Defensive tackle Grady Jarrett insists this season can be different.

"It's a new year and a new team," Jarrett said. "We're excited to get back to work."

Seattle led 14-12 at halftime but pulled away in the third quarter. The fourth-down plays changed the game.

On fourth and 5 from the Atlanta 38, Russell Wilson floated a perfect sideline pass to DK Metcalf, who didn't have to break stride while beating man coverage from Isaiah Oliver.

On Atlanta's next possession, Quinn called a fake punt on a fourth-and-2 play from the Falcons 33. It appeared to be a big gamble in a close game, especially on Atlanta's side of the field. 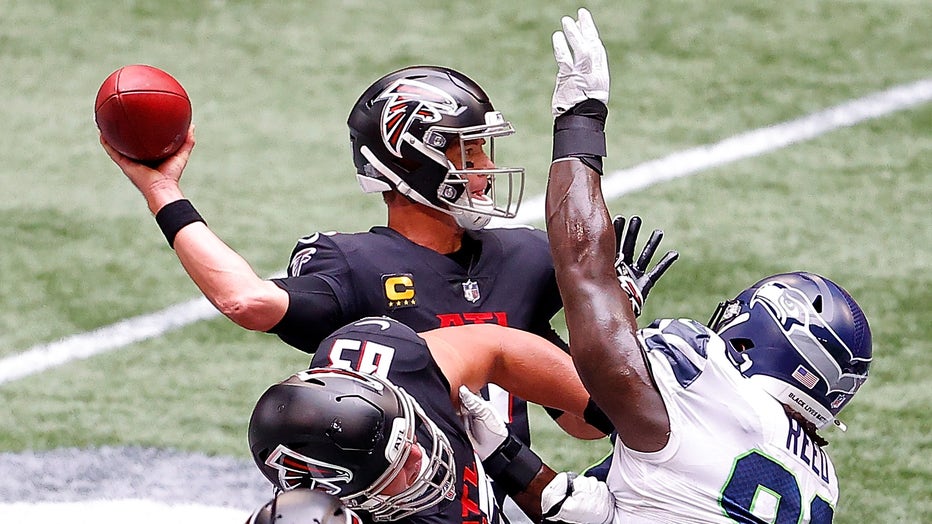 ATLANTA, GEORGIA - SEPTEMBER 13: Matt Ryan #2 of the Atlanta Falcons looks to pass in the first half against the Seattle Seahawks at Mercedes-Benz Stadium on September 13, 2020 in Atlanta, Georgia. (Photo by Kevin C. Cox/Getty Images)

Quinn said the instructions were for upback Sharrod Neaseman to take the snap only "if we had the right look" from the Seattle punt coverage team.

"When the look came up, we executed it," Quinn said. Neaseman would have had the 2 yards for the first down, but Seattle's Marquise Blair forced a fumble that was recovered by teammate Freddie Swain.

The Seahawks took advantage of the game's first turnover with a quick scoring drive capped by Wilson's fourth touchdown pass.

The Falcons no longer could stick with their plan for a balanced attack led by running back Todd Gurley, who ran for 56 yards and a touchdown in his Atlanta debut.

The Falcons won their last four games last season to save Quinn's job. With a tough challenge ahead in next week's visit to Dallas, the focus will be on avoiding another big deficit in the NFC South.

"We've just got to do better at the end of the day," said Julio Jones, who had nine catches for 157 yards, leading three receivers with more than 100 yards.

Matt Ryan passed for 450 yards, the second-highest total of his career, and passed John Elway for ninth place in career passing yards.

Quinn's team had reasons for optimism.

Gurley looked explosive and said he feels healthy. Ryan, now 35, produced big numbers in the passing game. The Falcons had three sacks, including 1 1/2 by Jarrett.

Still, the Falcons were 0-for-4 on fourth down and couldn't overcome the decisive sequence of plays in the third quarter.

"We didn't capitalize on certain situations and I felt that determined the game," Jones said.

Only one week into the season, the Falcons already feel a sense of urgency.

"We've got to put it together now," Gurley said. "You don't want to fall behind in this league."