The Falcons (3-7) had only two interceptions all season -- and none since Week 2 against the Eagles -- but intercepted Allen three times in the first half to build a 20-0 lead.

Matt Ryan improved to 7-1 in his past eight starts against the Panthers, throwing for 311 yards including a 6-yard touchdown pass to Calvin Ridley. 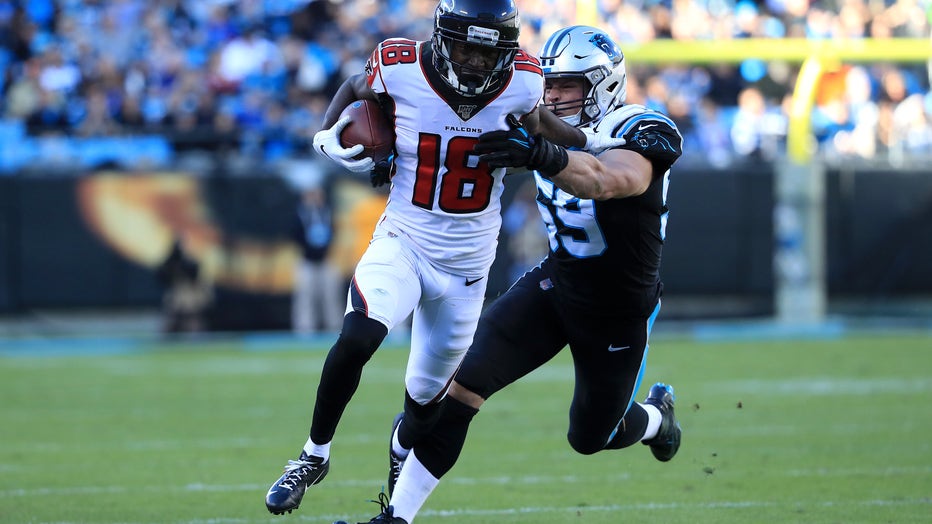 Ridley found huge holes in the Carolina defense, finishing with eight catches for 143 yards and rookie Qadree Ollison added a 2-yard TD run for the Falcons, who won despite playing without running back Devonta Freeman and tight end Austin Hooper.

It was the second straight dominant defensive performance for the Falcons, who defeated the Saints 26-9 last Sunday.

Allen struggled all day for Carolina (5-5), continuing a disturbing trend.

The second-year quarterback has thrown eight interceptions in the past four games, after not throwing any in his first four career starts. He spent most of the game under heavy duress, while the Panthers offensive line racked up holding penalties in an unsuccessful effort to protect him.

The Falcons dominated in every phase of the game, including special teams.

Barner, who was drafted by the Panthers in 2013, gave Atlanta the boost it needed when he fielded Michael Palardy's punt and weaved his way up the field, picking up blockers along the way en route to an early 10-0 lead. It was the first punt return allowed by the Panthers since 2016.

Christian McCaffrey finished with 191 yards from scrimmage for the Panthers but failed to score for the first time since Week 2. He passed LaDainian Tomlinson (238) for the most receptions by a running back in his first three NFL seasons.

Falcons: Takk McKinley injured his shoulder on a first-half sack of Allen and did not return.