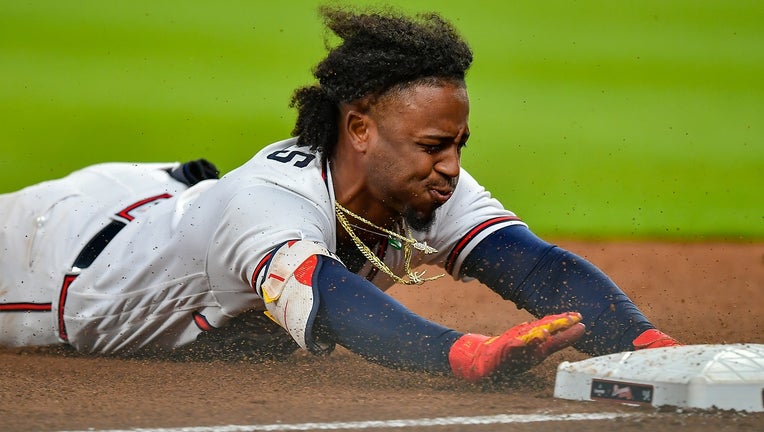 Atlanta second baseman Ozzie Albies slides safely into third base with a triple during the MLB game between the Chicago Cubs and the Atlanta Braves on April 26th, 2022 at Truist Park in Atlanta, GA. (Photo by Rich von Biberstein/Icon Sportswire via G

ATLANTA - Travis Demeritte hit his first big league homer in nearly three years and made an impressive catch to back another strong outing by Max Fried, giving the Atlanta Braves a much-needed 3-1 victory over the Chicago Cubs on Tuesday night.

The World Series champions won for only the third time in their last eight games. The Cubs have lost six of seven.

Following up his best showing of the season in a win at the Dodgers, Fried (2-2) pitched four-hit ball over six innings. His only big mistake was a changeup that Ian Happ launched into the left-field seats leading off the third to tie the game at 1.

Fried got some defensive help from Demeritte, who raced over from his position in right field to make a nice sliding catch in foul territory to end the fourth.

After getting some treatment on a skinned-up knee, Demeritte broke the tie in the fifth with an opposite-field liner into the Chop House restaurant in right field off Marcus Stroman (0-3).

It was Demeritte’s first homer with the Braves and fourth of his big league career. He hit the first three with the Detroit Tigers in 2019, the last of them on Sept. 12 against the New York Yankees.

The former first-round pick has spent most of his professional career in the minors, including the start of this season after failing to earn a spot on the Braves opening-day roster.

But Demeritte is finally getting a chance to impress in Atlanta, at least until Ronald Acuña Jr. returns from an injury rehab assignment.

Will Smith, Tyler Matzek and Kenley Jansen finished up for the Braves with one scoreless inning apiece. Jansen earned his fifth save in five chances.

Adam Duvall put the Braves ahead in the second with a sacrifice fly. After Demeritte’s homer, the Braves tacked on an insurance run when Michael Hermosillo let a liner skip by him, the ball rolling almost to the center-field wall.

Dansby Swanson, who had been running from first on the hit-and-run, came all the way around to score. Ozzie Albies wound up at third on the two-base error but was stranded there.

Capping a terrible game, Hermosillo was inexplicably doubled off first to end the eighth when he took off running on a fly ball to deep right-center that was caught rather easily by Duvall.

Eddie Rosario got off to a bad start this season. There’s appears to be a good reason. The Braves placed their slumping outfielder on the injured list with blurred vision and swelling in his right eye. He is expected to miss eight to 12 weeks. Rosario was a star of the 2021 postseason, when he was the MVP of the NL Championship Series and helped the Braves win their first World Series title in 26 years. But he had just three hits in his first 44 at-bats this season for an .068 average, with no homers or RBIs. Turns out, Rosario has been dealing with swelling in his right retina that caused blurred vision. He was examined by a retinal specialist Monday and will undergo a laser procedure to correct the problem.

Cubs: RHP Mark Leiter Jr. (0-1, 11.05 ERA) is off to a rough start in his return to the big leagues after three full seasons away. He has surrendered eight hits, six walks, two homers and nine earned runs over 7 1-3 innings.