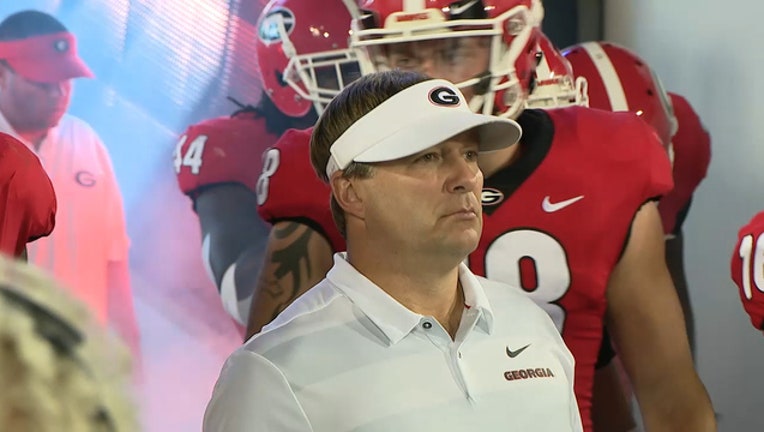 ATHENS, Ga. (AP) - A year ago, Georgia was getting ready for the College Football Playoff.

Now, it feels like the Bulldogs are preparing for the Letdown Bowl.

Georgia missed out on the four-team playoff field after another bitter loss to Alabama, forcing it to settle for the Sugar Bowl as a consolation prize.

While the New Orleans game occupies a treasured place in the school's storied football history - "Ohhh, look at the sugar falling out of the sky," the late Larry Munson said in one of his most famous radio calls - it doesn't mean a whole lot to the current group of players.

"I have no idea about any of that," said cornerback Eric Stokes, a redshirt freshman who has never been to the Big Easy. "I'm lost."

The Sugar Bowl is where the Bulldogs clinched their only consensus national championship after the 1980 season with a 17-10 victory over Notre Dame. It's also where the Bulldogs missed out on another national title at the end of the 1982 season, losing 27-23 to Penn State in the final game of Herschel Walker's brilliant college career.

When Georgia (11-2) faces Texas (9-4) at the Superdome on New Year's Day, it will mark the Dawgs' 10th appearance in the game - far more than any other bowl - but their first since 2008, when they blew out Hawaii 41-10 and finished No. 2 in the final Associated Press rankings.

None of that means much to the current team.

These guys would much rather be in Texas or South Florida, the sites of this year's semifinal games.

"If you go around the team and ask everybody, 'Hey is this where we wanted to be?' the answer is, 'No, it's not,'" quarterback Jake Fromm conceded. "But we're excited to be here. It's the Sugar Bowl. It's a really big bowl, so we're excited, we're working, we're trying to get better, and we're going to come out and win this last football game."

Coach Kirby Smart acknowledged the challenge of firing up his team for a game that seems to have few ramifications beyond pride - especially for those who played in last year's memorable playoff run, when the Bulldogs defeated Oklahoma 54-48 in overtime at the Rose Bowl semifinal game, before losing to Alabama 26-23 in another overtime thriller at the national championship game.

Georgia had a shot at getting back to the playoff when it faced No. 1 Alabama two weeks ago in the Southeastern Conference title game. But the Crimson Tide rallied from a pair of 14-point deficits, defeating the Bulldogs 35-28 to lock up the top seed in the playoff.

Georgia finished fifth in the rankings - one spot shy of the postseason games that really matter.

"It's been a big topic of conversation for our staff," Smart said. "A traditionalist like myself - probably my age and older - see bowl games, the Sugar Bowl in particular, a certain type way."

The players? They see it an entirely different way.

"It's kind of like talking to our players about Herschel Walker. They don't have memories of that," Smart said. "Shoot, our guys don't remember Robert Edwards. You know, it's just very different and a very delicate situation, because you have to make football meaningful and fun."

So, Smart and his staff are having to do a selling job.

"To us, there is a ton meaningful about an opportunity to play another football game," he said. "To increase your legacy as a senior class, to be one of those three most winning senior classes to ever come through here, there's value in that. But sometimes to the senior class you have to be careful that they don't see it like it's punishment."

Smart is also dealing with a staff shake-up.

Shortly after the loss to Alabama, defensive coordinator Mel Tucker left to become the head coach at Colorado. He took along two members of Smart's support staff as his coordinators: Jay Johnson and Tyson Summers, who headed up the Bulldogs' quality control on offense and defense, respectively.

Smart, a longtime defensive coordinator at Alabama, is in no hurry to name a replacement. He can handle the defensive play-calling duties in the Sugar Bowl, while also assuming some of Tucker's duties working with the secondary. There's also Bacarri Rambo, a former Georgia safety who is on staff as a graduate assistant.

"We'll have a ton of interest, obviously, with an opportunity to come in and be at a place with good players like the University of Georgia," Smart said.

Smart hasn't heard from any seniors or possibly juniors who might skip the Sugar Bowl, but he knows that's still a possibility. Several top players at other schools have already announced they won't be participating in bowl games to avoid the risk of injury and get an early jump on preparing for the NFL draft.

For those who make the trip to New Orleans, the main goal will be avoid a letdown.

"This is the hand we were dealt," Fromm said. "I'm know I'm going to go out and try to compete and play my best. That's all I can ask of myself."