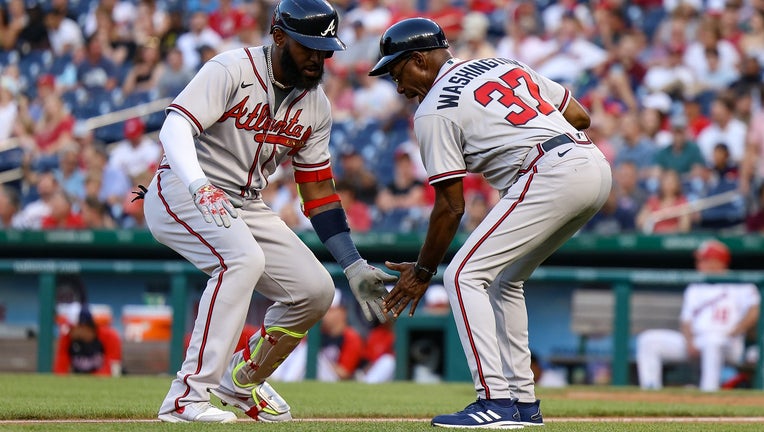 Marcell Ozuna (20) of the Atlanta Braves celebrates a home run with third base coach Ron Washington (37) against the Washington Nationals on June 14, 2022 at National Park in Washington, DC. (Photo by John McCreary/Icon Sportswire via Getty Images)

WASHINGTON - Michael Harris II and Travis d’Arnaud each had three hits and homered for the second straight game, and the Atlanta Braves connected five times in their 13th straight win, 10-4 over the Washington Nationals on Tuesday night.

Atlanta hit back-to-back homers for the third straight game, this time doing it twice. D’Arnaud and Marcell Ozuna went deep in the third inning, and Orlando Arcia and Harris II followed in the sixth.

Dansby Swanson also homered for the Braves, who have clubbed 32 home runs during the winning streak, the longest in the majors this season. It’s Atlanta’s best stretch since it won 14 consecutive games from July 26 to Aug. 9, 2013.

Braves starter Max Fried (7-2) struck out the first five Washington batters. He went 5 2/3 innings, allowing four runs on six hits while striking out six and walking one. Jackson Stephens pitched the final three innings for his second save.

Ehire Adrianza had two hits for the Nationals, who have lost three straight.

Jackson Tetreault (0-1), called up from Triple-A Rochester to make the start in place of Strasburg, allowed seven runs on nine hits over four innings in his major league debut.

Swanson homered with one out in the first, his second in two games and the 11th of his career at Nationals Park.

D’Arnaud’s line-drive, three-run shot made it 5-0 in the third and Ozuna followed with his second homer in two days, a shot into the Braves bullpen in left center.

Braves: Albies, who left Monday’s game in the fifth inning, was being evaluated on Tuesday. "Hopefully he heals quick and we get him taken care of," manager Brian Snitker said.

Nationals: Manager Dave Martinez said Strasburg’s injury is related to the surgery for thoracic outlet syndrome he had last summer. … RF Juan Soto was given a day off after slipping and banging his right knee against the corner of the dugout bench Monday night. Martinez said an X-ray of the knee was clean.

Braves: RHP Spencer Strider (2-2, 2.35 ERA) faces the Nationals for the second time this season after allowing one run in 3 1/3 innings of relief on April 11.