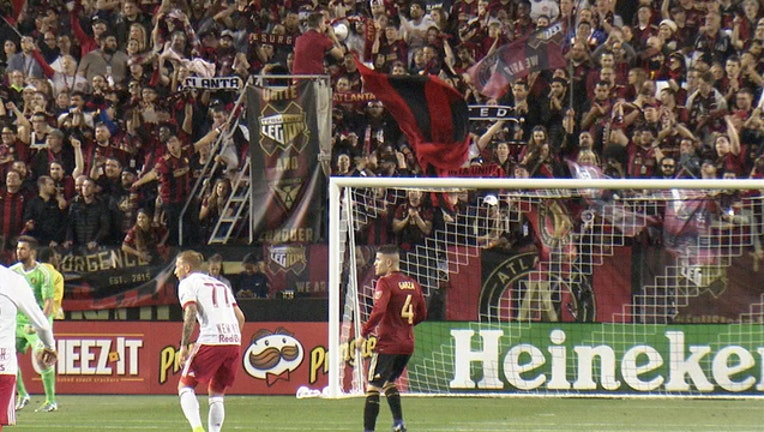 Josef Martinez is a big reason for that.

Martinez scored a pair of second-half goals, giving him an MLS-leading five on the season, and United turned in another dominating performance with a 4-0 victory over the Chicago Fire on Saturday.

Before a raucous crowd of 45,922 at Bobby Dodd Stadium, United (2-1-0) posted the first home victory of its inaugural season and has now scored 11 goals overall - more than any team in the league.

"As long as we keep scoring goals, I think we'll be OK," midfielder Julian Gressel said with a smile.

United jumped ahead 4 minutes into the game off an own-goal by Chicago's Brandon Vincent. Gressel's attempted cross from the right side of the penalty area deflected off Vincent and bounced right past the goalkeeper Jorge Bava.

Atlanta poured in after halftime against the Fire (1-1-1), who played a man down most of the game after Johan Kappelhof was sent off in the 15th minute for dragging down Martinez as he was breaking toward the goal.

"The game very early started bad for us," Chicago coach Veljko Paunovic said. "We weren't capable for reacting and adjusting."

With United dominating possession and creating one scoring chance after another, it was only a matter of time before the home team broke it open.

Martinez made it 2-0 in the 60th off a deft flick from Miguel Almiron. The Venezuelan added his second goal in the 82nd, breaking free in the box and sliding in the shot from a tough angle.

"With a game like today, it's difficult to talk about just one person. I prefer to talk about the team's performance as a whole," coach Gerardo Martino said through a translator. "But it's evident to us that Josef is a great goal scorer."

Hector Villalba scored in the 67th on a booming left-footer after winding up with the ball right at the penalty spot when Greg Garza's shot deflected off a Chicago defender.

With most of the play at the other end of the field, Kann was barely tested. He stopped three shots to record the first shutout in team history and third of his career.

"My goal every game is to keep a clean sheet," said Kann, who grew up in Decatur, just outside of Atlanta. "But when you score four goals, it definitely makes my job easier."

United has averaged more than 50,000 for the first two games at its temporary home on the Georgia Tech campus. The team will move into $1.5 billion Mercedes-Benz Stadium in late July but has already established an imposing home-field advantage.

"If today was an indication," Kann said, "teams are not going to want to come here and play."

The big crowd unveiled a banner before the game that said, "Show Racism the Red Card" - taking aim at an anti-gay chant used by some fans during the team's first game. The team vowed to evict any fans who used the offensive chant again.