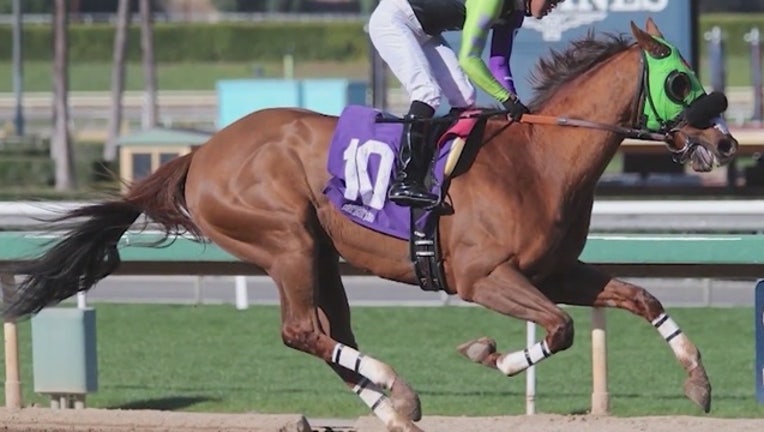 ARCADIA, Calif. (FOX 11) - Another racehorse has been euthanized at Santa Anita Park, the 26th horse death at Santa Anita since the track's racing season opened on Dec. 26.

Kochees, a 9-year-old gelding, was put down Sunday after suffering a leg injury during a race the previous day, the track confirmed.

He is the third horse to die at the Arcadia facility within the past nine days, after several weeks without a fatality.

Kochees was running in his 49th race, a $10,000 claiming race over 5 1/2 furlongs, when he was pulled up by jockey Mario Gutierrez while entering the top of the stretch, according to the Los Angeles Times, which was first to report the death.

The newspaper reported that the horse was taken off the course in a van and left overnight in his stall with a splint on his injured leg in the hope of stabilizing his condition. Surgeons reportedly weighed an operation, but discovered the horse had lost blood flow to the leg and the decision was
made to euthanize.

Mike Willman, Santa Anita's director of publicity, confirmed the details, said, "every effort was made to save the animal."

A group of animal rights activists protested outside the park Sunday morning, before news broke of the latest fatality. Later, People for the Ethical Treatment of Animals released the following statement from Senior Vice President Kathy Guillermo:

"Santa Anita and all California tracks must suspend racing until the ongoing investigation by the district attorney is complete and the new rules have been strengthened. Decreasing the number of broken bones is not enough. PETA and Social Compassion in Legislation are currently working with The Stronach Group and the California Horse Racing Board to enact new regulations and laws to stop all deaths. Nothing short of a zero-fatality rate is acceptable."

Los Angeles County District Attorney Jackie Lacey last month announced the creation of a task force to investigate the deaths of the horses at the track.

In a letter to the California Horse Racing Board on April 2, California Sen. Dianne Feinstein called for racing to be suspended at the track "until the cause or causes of these deaths can be fully investigated."

On May 18, an unraced 3-year-old gelding named Commander Coil suffered a fatal shoulder injury while galloping during training. His death was the first since March 31.

"Equine shoulder injuries are rare, especially for a horse that is galloping as opposed to breezing or racing," according to a statement from The Stronach Group, which owns Santa Anita. "A comprehensive evaluation will be completed to understand what might have caused this uncommon injury."

On Sunday May 19, Spectacular Music, a 3-year-old gelding, sustained a pelvic injury while running his first career race and was put down.

"The Stronach Group remains committed to operating Santa Anita Park with stringent protocols that prioritize the health and safety of horses and riders first and foremost," the statement said.

Santa Anita was closed to racing for most of March while authorities studied the racing surface for possible causes contributing to the deaths. Some observers have speculated that this year's unusual level of rain is playing a role in the fatalities. Santa Anita's owners brought in national experts to conduct days of testing on the track's soil, but no problems were found.

Races resumed after the state horse racing board approved a series of safety measures, including limits on certain types of medications administered to horses.

In early April, Santa Anita officials announced a series of new measures to help bolster the safety of horses at the track, including restrictions on certain medications, requiring trainers to get permission in advance before putting a horse through a workout and investing in diagnostic equipment to aid in the early detection of pre-existing conditions.

CNS contributed to this story.