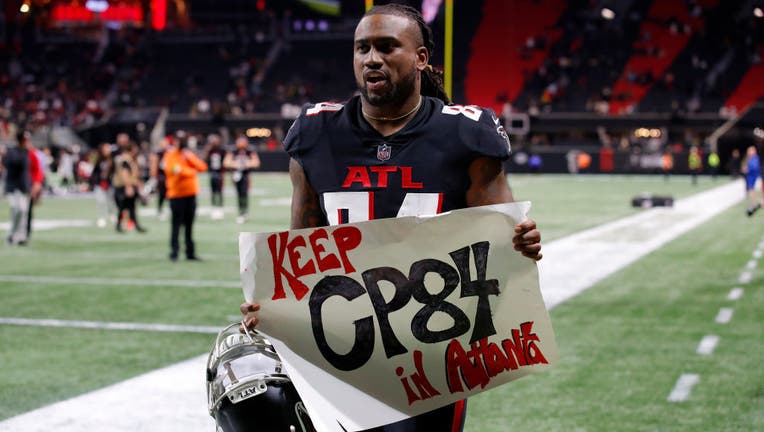 ATLANTA, GEORGIA - JANUARY 09: Cordarrelle Patterson #84 of the Atlanta Falcons holds a sign from a fan as he walks off the field after the game against the New Orleans Saints at Mercedes-Benz Stadium on January 09, 2022 in Atlanta, Georgia. (Photo b

ATLANTA - The Atlanta Falcons addressed one of their biggest offseason priorities by agreeing to terms on a new contract Saturday with all-purpose standout Cordarrelle Patterson.

The 31-year-old Patterson confirmed the deal on his Twitter account, saying money was not his primary concern.

"Atl was (where) I wanted to be at the end of the day!!!" Patterson tweeted.

ESPN reported that Patterson agreed to a two-year, $10.5 million deal.

The re-signing of Patterson was a bit of good news for the Falcons after their pursuit of quarterback Deshaun Watson ended with him choosing a trade to the Cleveland Browns rather than joining his hometown team.

Losing out on Watson will force the Falcons to patch up their relationship with longtime starter Matt Ryan, the 2016 NFL MVP who had seemed headed for a trade.

Patterson was a surprising offensive star for the Falcons in his first season with the team, lining up at running back, receiver and kickoff returner.

He set career highs in rushing and receiving. Patterson ran for 618 yards and six touchdowns on 153 carries, while grabbing 52 passes for 548 yards and five touchdowns. He also had 18 returns for 434 yards.

Patterson has eight kickoff returns for touchdowns in his career, tied for the most in NFL history.