The NFL is placing all teams in intensive protocol starting Saturday to mitigate the risk of COVID-19 as the number of cases rises around the country.

Use of masks will be mandatory at all times at team facilities, including during practice and in weight rooms. Meetings must be held either virtually or in the largest indoor space with approval by the league. Meals have to be made available for grab-and-go to avoid players and staff congregating in cafeterias. Time spent in the locker room also has to be limited. 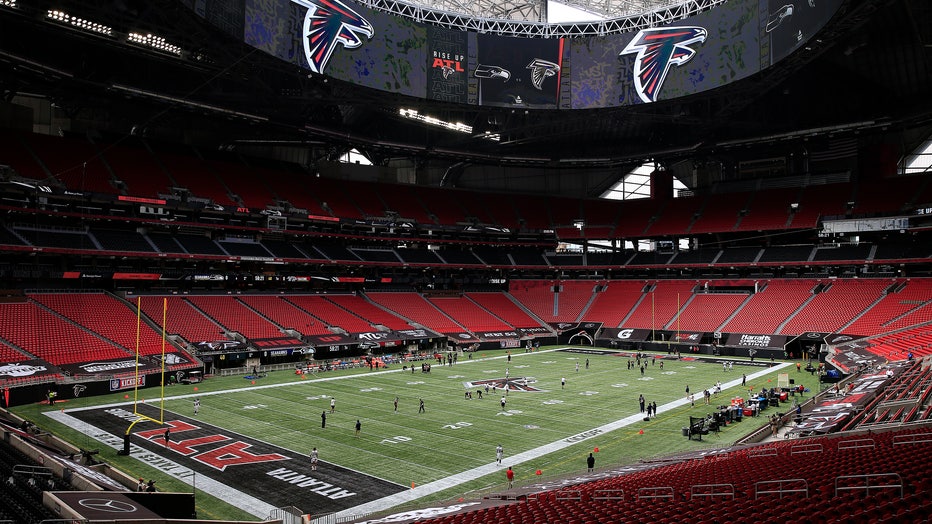 ATLANTA, GA - SEPTEMBER 13: Players warm up prior to the NFL Week 1 game between the Atlanta Falcons and the Seattle Seahawks on September 13, 2020 at Mercedes-Benz Stadium in Atlanta, Georgia. (Photo by David J. Griffin/Icon Sportswire via Getty Ima

Clubs operating under the intensive protocols have reduced close contacts by more than 50% since the fifth week of the regular season, according to a memo obtained by The Associated Press that was sent from NFL Commissioner Roger Goodell to teams on Wednesday.

"These sustained reductions and the resulting health and safety benefits make it appropriate to implement the intensive protocols on a mandatory, league-wide basis," Goodell said in the memo.

So far, 28 teams have entered intensive protocol at some point and 16 teams have done it more than once.

"The upcoming holidays, beginning with Thanksgiving next week, will introduce new risks of exposure that we need to address now," Goodell wrote. "Because we have a highly sophisticated program of daily testing, we know when the virus enters our facilities, which underscores the importance of contact tracing and other steps to minimize close contacts within a facility.

"Recent experience has highlighted the importance of minimizing high-risk close contacts; on multiple occasions, we have seen individuals identified on that basis test positive within a short time. We have also seen many instances in which effective action by clubs to minimize these close contacts prevented the virus from spreading within the club, and avoided players or coaches being ruled out of practice or games."

The NFL said Tuesday there were 17 new confirmed positives among players and 35 among other personnel during testing from Nov. 8-14. That brought the league's total to 95 players and 175 other personnel since Aug. 1, not counting new cases this week.

"The biggest motivator I find when we talk to the clubs about this is simply that if they are not in compliance with the protocols from a mask-wearing perspective or for some reason somebody forgot their device or something like that, they're much more likely to be identified as a high-risk close contact than they would otherwise," said Jeff Miller, the league's executive vice president of communications, public affairs and policy.

"So when that individual coach or player is removed from the team environment for five days because their mask was down, that's a lesson learned throughout the facility. And so I don't think we see a lot of repeat problems as far as that goes. Not everybody's perfect all the time. But I think the biggest enforcement piece is taking somebody out of the team environment and potentially costing them the opportunity to play in the game or to go through a week's worth of the practice. I think that part of it is a little bit undersold. It feels like a lot when we talk to the clubs as a behavior change mechanism."

Teams not having been in the intensive protocols are the Jets, Buccaneers, Seahawks and Washington.

"Well, it does shift some things," Seattle coach Pete Carroll said. "It's not a problem for us . ... So we'll do whatever. ... We're gonna follow to the letter of the law, and continue to really have an attitude that we can pull this thing off. I think the mentality of it is important as anything, because it has to carry over into all aspects, and all facets of everybody's lives."

Asked his thoughts on the intensive protocol mandates, Broncos linebacker Alexander Johnson said: "We gotta do what we gotta do to get paid."

"You gotta do whatever it takes to stay safe and be able to play this game," Maddox said. "You have to be responsible at home and be ready for whatever they have planned for us."