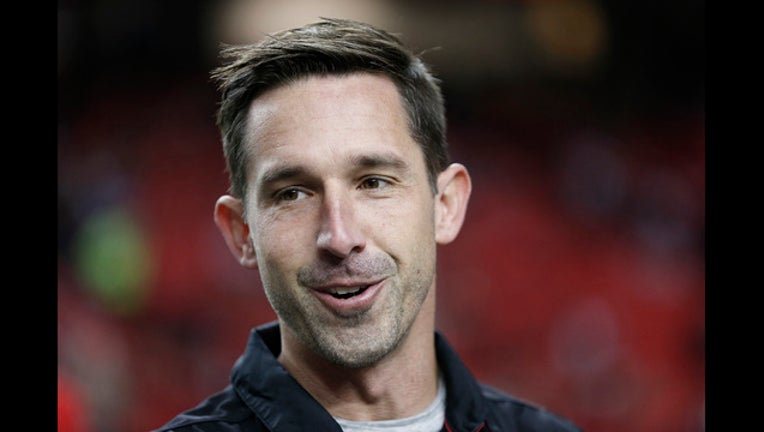 Atlanta Falcons offensive coordinator Kyle Shanahan walks on the turf before the first half of an NFL football game between the Atlanta Falcons and the San Francisco 49ers, Sunday, Dec. 18, 2016, in Atlanta. (AP Photo/John Bazemore)

SAN FRANCISCO (KTVU) -- The San Francisco 49ers on Monday announced that it has hired Kyle Shanahan as the team's head coach, its 20th in the team's history.

"This is a very exciting day for the San Francisco 49ers and our fans," said 49ers CEO Jed York. "Throughout this process, we learned many things about Kyle that convinced us he is the perfect coach to lead this team. Over the years, he has proven to be one of the brightest minds in the game of football and his recent success speaks for itself."

The team is expected to hold a news conference at Levi's Stadium later this week to introduce Shanahan to the community.

"The San Francisco 49ers are very fortunate to be able to bring in a coach of the caliber of Kyle Shanahan," said 49ers General Manager John Lynch. "As an offensive mind, I think he stands alone in the National Football League, as evidenced by the explosive and record-setting offense in Atlanta. I am thrilled to have Kyle Shanahan on board."

Shanahan has 13 seasons of coaching experience at the NFL level, including the past nine as an offensive coordinator for the Atlanta Falcons (2015-16), Cleveland Browns (2014), Washington Redskins (2010-13) and Houston Texans (2008-09), according to stats released by the 49ers.

News of Shanahan's hiring came one day after the Falcons collapsed in its bid to defeat the New England Patriots and claim a Super Bowl win.

The Falcons lost the big game 34-28 after the Dirty Birds squandered a big lead and the Patriots came from behind during the Super Bowl's first overtime in league history.

Shanahan, 36, joined the Falcons after spending 2014 as offensive coordinator of the Cleveland Browns. That year, his offense averaged 324.6 total yards and 108.0 rushing yards per game.

Born in Minneapolis, Shanahan played wide receiver at Duke University before transferring to the University of Texas in 200, where he spent two seasons.

"It is truly an honor to be named head coach of the San Francisco 49ers, one of the marquee franchises in all of sports," Shanahan said in a written statement. "I must thank Jed and the York family for entrusting me with this great privilege and tremendous opportunity."