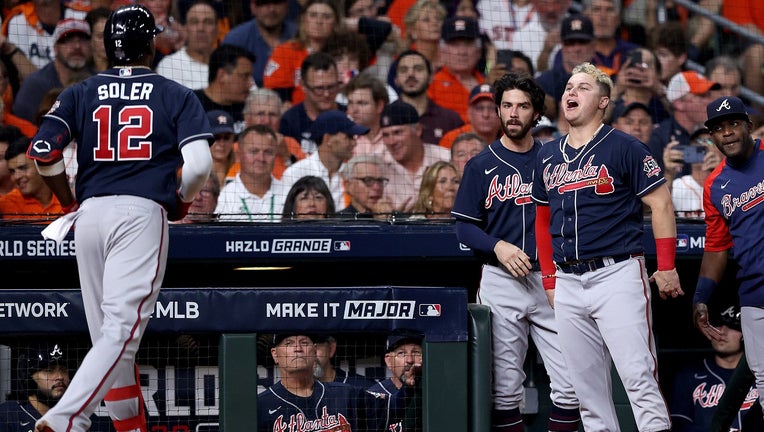 Jorge Soler #12 of the Atlanta Braves is congratulated by his teammates after hitting a solo home run against the Houston Astros during the first inning in Game One of the World Series at Minute Maid Park on October 26, 2021 in Houston, Texas. (Photo

ATLANTA - The Atlanta Braves struck with the very first pitch and just kept going in Game One of the World Series on Tuesday evening. The Braves beat the Houston Astros 6-2.

It was a healthy swing by Jorge Soler that powered the Atlanta Braves to a smashing start in their first World Series appearance in nearly two decades.

Making his first start since testing positive for COVID-19, Soler became the first player to begin a World Series with a home run and the Braves, despite the loss of pitcher Charlie Morton to a broken leg, hushed the Astros. 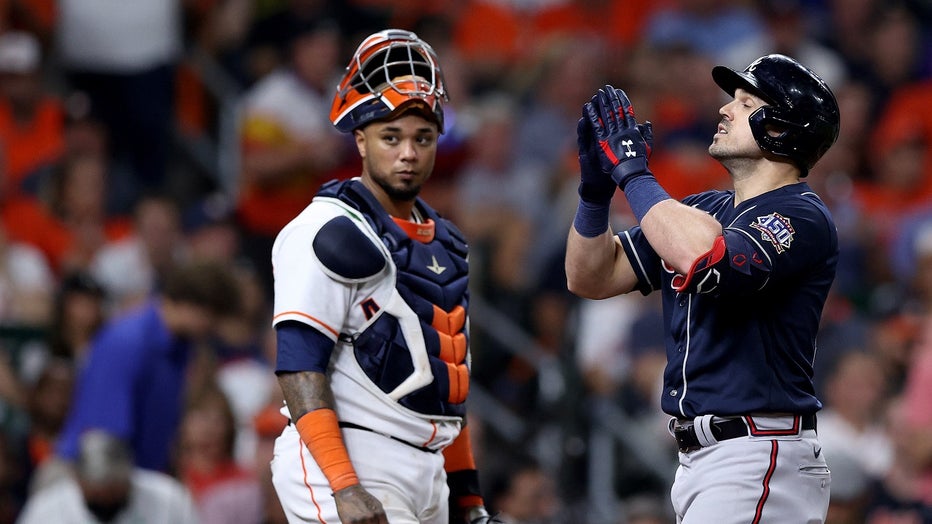 Adam Duvall #14 of the Atlanta Braves celebrates after hitting a two run home run against the Houston Astros during the third inning in Game One of the World Series at Minute Maid Park on October 26, 2021 in Houston, Texas. (Photo by Elsa/Getty Image

Boosted by a strong bullpen effort, a two-run homer by Adam Duvall and a late sacrifice fly from Freddie Freeman, the Braves coasted in their first Series appearance since Chipper Jones and their Big Three aces ascended in 1999.

Jose Altuve, Carlos Correa and the Astros mostly looked lost at the plate. This is their third World Series in five seasons -- and first since their illegal sign-stealing scheme was revealed.

Before the game, Major League Baseball Commissioner Rob Manfred said there were plenty of sleuths monitoring the dugouts, clubhouse and stands to guard against any possible shenanigans.

"There's a lot more people watching what goes on as a result of the issues that we've had," he said. 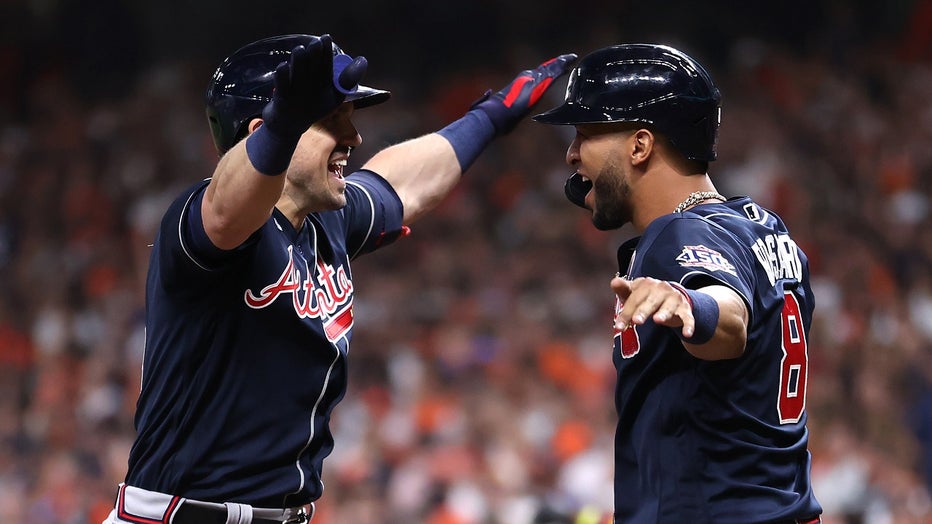 Eddie Rosario #8 congratulates Adam Duvall #14 of the Atlanta Braves after hitting a two run home run against the Houston Astros during the third inning in Game One of the World Series at Minute Maid Park on October 26, 2021 in Houston, Texas. (Photo

Fresh off dispatching the defending World Series champion Dodgers in the playoffs, the Braves weren't done, either. Aggressive in every way, they kept teeing off against their former, longtime National League rivals.

Moments later, Ozzie Albies stole a base and Austin Riley hit an RBI double, taking a rare swing at a 3-0 pitch.

Soler added an RBI grounder in the second and when Duvall launched a two-run homer, it was 5-0 and the Braves had made even more October history -- the only team to score in each of the first three innings in a World Series opener.

At that point, Braves batters were far from the only ones making noise. The few Atlanta fans sprinkled in the sea of orange had started their familiar chant, too.

By then, it looked as if everything was going right for the Braves.

But baseball can be a fickle game, and the fates can spin faster than the best curveball.

Because in the bottom the third, Atlanta absorbed its own big hit.

As he struck out Altuve, Morton suddenly grimaced and took an awkward step. His teammates, manager Brian Snitker and a trainer soon joined him on the mound, and just like that, Morton was gone.

Turned out a hard comebacker by Yuli Gurriel that ricocheted off Morton's leg to Freeman at first base for an out to begin the second had done more damage than anyone realized. 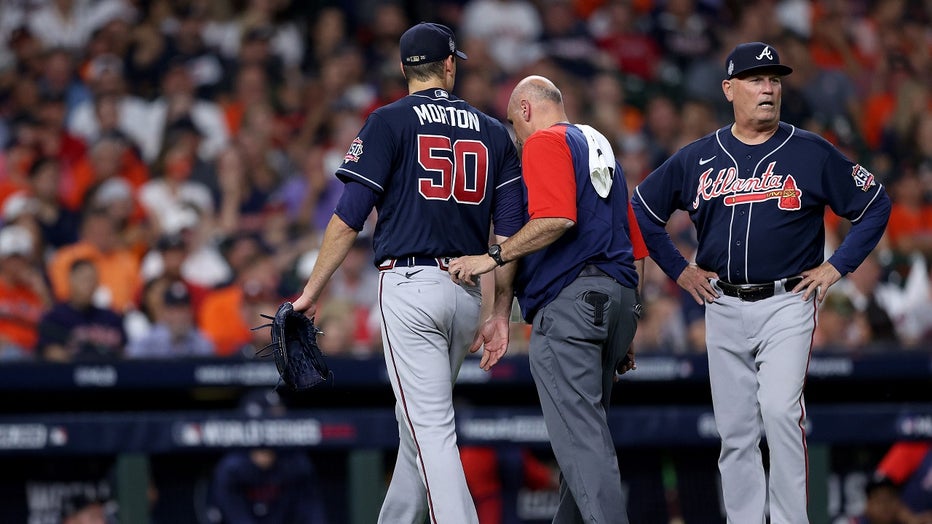 Charlie Morton #50 of the Atlanta Braves is taken out of the game against the Houston Astros during the third inning in Game One of the World Series at Minute Maid Park on October 26, 2021 in Houston, Texas. (Photo by Elsa/Getty Images)

Morton stayed in for another inning, amazingly, before gingerly walking off with a fractured right fibula. The 37-year-old righty, the winning pitcher for the Astros in Game Seven of the 2017 World Series, will be replaced on the roster. He's expected to be OK for spring training. 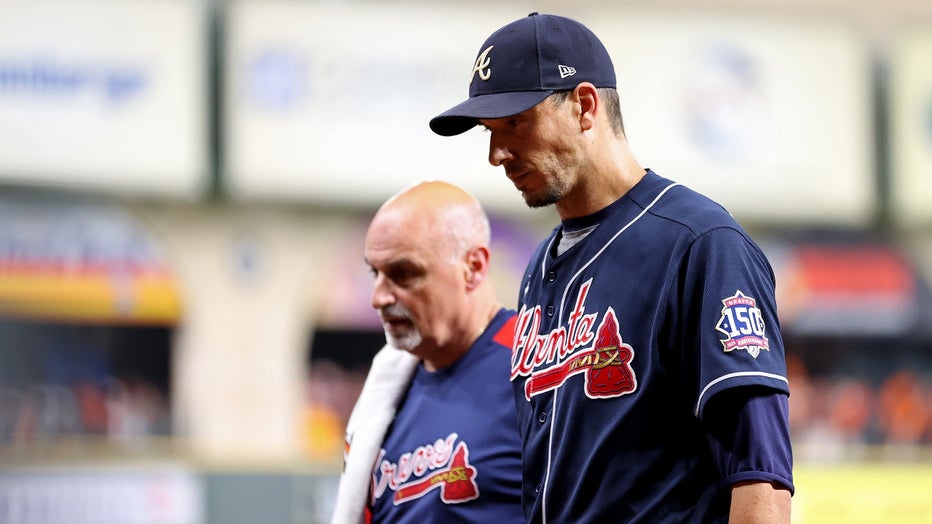 Charlie Morton #50 of the Atlanta Braves is taken out of the game against the Houston Astros during the third inning in Game One of the World Series at Minute Maid Park on October 26, 2021 in Houston, Texas. (Photo by Carmen Mandato/Getty Images)

A.J. Minter replaced Morton and got the win, permitting one run in 2 2/3 innings. Atlanta relievers Tyler Matzek, Luke Jackson and Will Smith finished it.

Altuve and the Astros did little all night. The All-Star second baseman struck out three times -- he'd never done that in 73 prior postseason games. 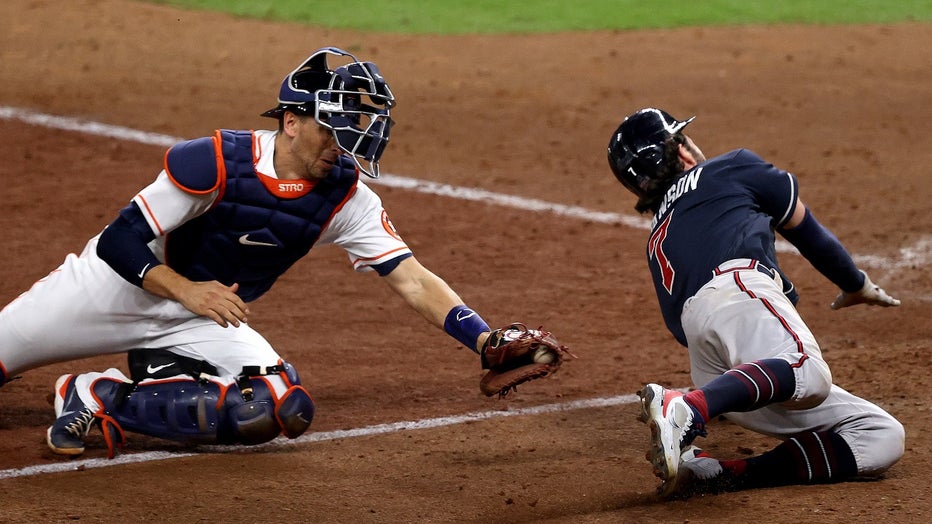 Dansby Swanson #7 of the Atlanta Braves slides in safely past Martin Maldonado #15 of the Houston Astros to score a run on sacrifice fly during the eighth inning in Game One of the World Series at Minute Maid Park on October 26, 2021 in Houston, Texa

Alex Bregman, Yordan Alvarez and the Astros never seriously threatened in the later innings. Their only runs, in fact, came on shortstop Dansby Swanson's fielding error in the fourth and Correa's groundout in the eighth.

In fact, the game wasn't nearly as close as the score indicated. It was more like a romp -- during the seventh-inning stretch, as fans did a sing-a-long to "Deep In The Heart of Texas," Braves backup catcher William Contreras locked arms with starter Travis d'Arnaud and did a little Texas two-step as they switched places warming up Jackson.

It was the first World Series action with a packed stadium since Game Seven at this very park in 2019, when a sellout crowd silently filed out after watching the Nationals rally past Houston. That night, the biggest mystery was why didn't manager A.J. Hinch summon ace Gerrit Cole from the bullpen -- soon after, a lot of people had a lot bigger questions about the Astros. ... The Astros fell to 0-4 in World Series openers. ... No team has won a World Series game in its own park since the Dodgers beat Boston in 18 innings in Game Three of 2018. The visiting team won every game in 2019, and last year's Series was played at a neutral-site in Arlington, Texas.

Braves: Fried finished strong down the stretch and excelled in two playoff starts, but then faltered in Game 5 of the NLCS at Dodger Stadium. With a chance to clinch, the Atlanta ace gave up five runs and eight hits in 4 2/3 innings. 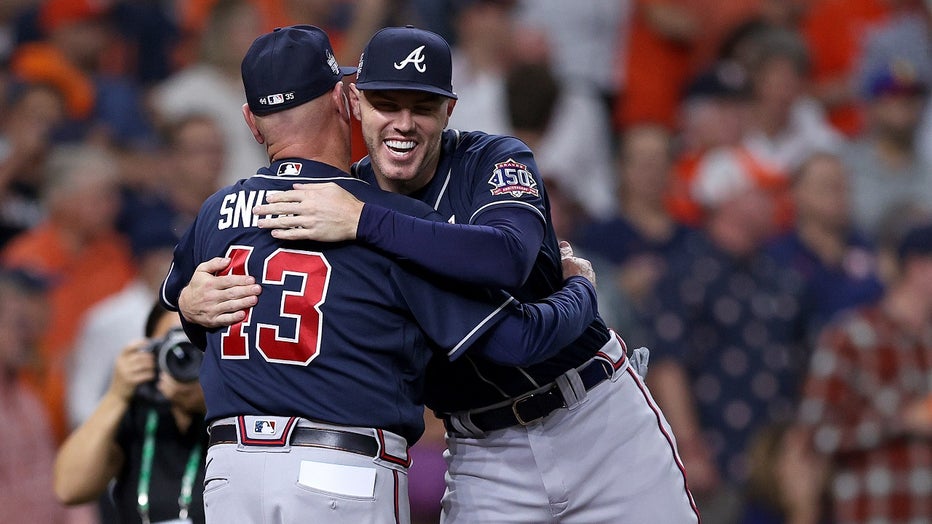 Manager Brian Snitker #43 of the Atlanta Braves hugs Freddie Freeman #5 prior to Game One of the World Series against the Houston Astros at Minute Maid Park on October 26, 2021 in Houston, Texas. (Photo by Elsa/Getty Images)

Astros: Urquidy was tagged by Boston for six runs in 1 2/3 innings in his previous start in Game 3 of the ALCS. He has postseason pedigree, though, pitching five scoreless innings as a rookie to beat Washington in Game Four of the 2019 World Series.