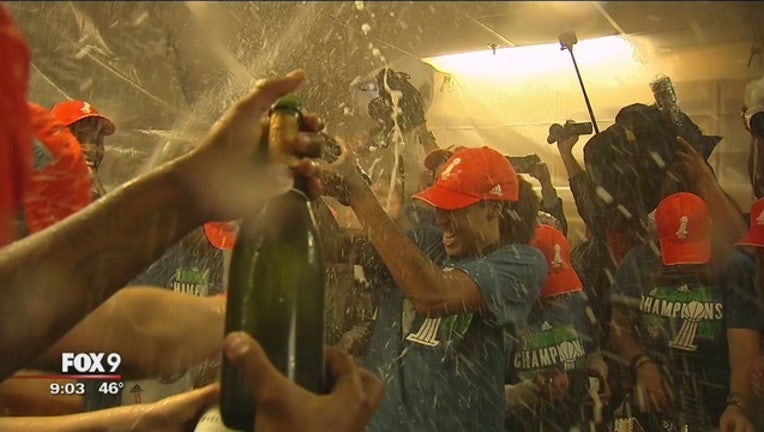 NEW YORK (AP) — There was much more at risk for the 1996 Olympic women's basketball team than just winning the gold medal when they took the floor against Brazil in Atlanta.

An 18-month journey was coming to an end and anything less than a gold medal would have been considered a huge failure for the Americans. But a defeat also could have been a major blow to the two professional startup leagues in the U.S. looming on the horizon after the Atlanta Olympics.

"We knew what was at stake," backup guard Dawn Staley said. "We knew there was a WNBA in waiting, there was the ABL in waiting. It was all depending on how successful we were as a team. And we also wanted to show America, our nation, that women playing at the peaks of their careers was truly something special."

They didn't disappoint the 32,987 fans at the Georgia Dome.

The U.S. cruised to a 111-87 victory over Brazil, capping off an 8-0 mark in the Olympics. That was the first of five straight gold medals for the Americans. That team dominated, led by Lisa Leslie, Katrina McClain and Sheryl Swoopes. They still hold several U.S. Olympic records, including scoring average (102.4), points (819) and assists (207).

"We were on a mission. We trained for a year and half together. That was the first time USA Basketball had ever put a group of women together," said Nikki McCray, currently an assistant on Staley's coaching staff at South Carolina. "We were machines. Credit Tara VanDerveer and her staff for just getting us ready, and we were unstoppable. To go 60-0? That's never been done before, and we were not going to fall short of winning the gold medal and to win it was truly remarkable."

That team, which started training together in 1995, was the foundation for the launch of the ABL and the WNBA. The ABL lasted only two years, but the WNBA is now in its 20th season. Players earned $50,000 the year they toured with the team. They traveled around the world, flying more than 100,000 miles and winning 52 games before the Olympics.

"Those players, not only did they represent us on the court in winning a gold medal in such a huge fashion, but they were publicizing and promoting the women's game and basically got two leagues off the ground and one has withstood everything, the WNBA," said New York Liberty assistant coach Katie Smith. "So we are indebted to them, a huge 'thank you' for what they did."

Because of the 1996 team, Los Angeles Sparks star Candace Parker was part of a generation who grew up looking forward to playing in a pro league — in the United States.

Parker wasn't the only current WNBA star the 1996 team influenced. Tamika Catchings was on the USA women's junior world championship qualifying team. After a practice in Colorado, she and her teammates were told a surprise awaited them. In walked Leslie, Swoopes, Staley and the rest of the 1996 Olympic team.

"It was so cool," Catchings said. "It was the first time for me that I saw players like Lisa and Dawn and Sheryl. It was someone that I wanted to be like. A female basketball player to look up to. But watching the Olympic team, I was like, 'Oh, my God. One day I want to be there, and I want to represent my country and have that opportunity.'"

Catchings has been a part of the last three Olympic gold medal winning teams for the U.S. She'll try to help the U.S. win a sixth consecutive gold medal at the Rio Games this summer.

The 1996 team didn't just leave their impact with the WNBA and Olympic success. Five players from that squad are coaching in college now — Jennifer Azzi, McCray, Katy Steding, Staley and Swoopes.

"It was a magical year," coach VanDerveer said. "Although I don't know that our players would say that. It was really a fantastic trip. I loved the whole experience."