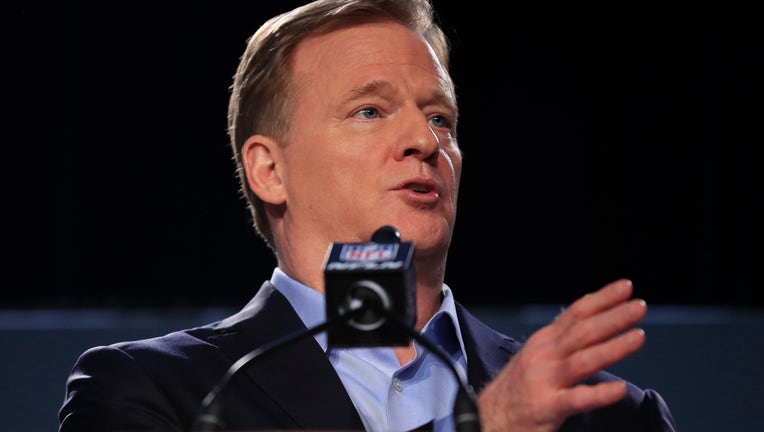 FILE - NFL Commissioner Roger Goodell speaks to the media during a press conference prior to Super Bowl LIV at the Hilton Miami Downtown on January 29, 2020 in Miami, Florida.

LOS ANGELES - NFL Commissioner Roger Goodell weighed in on the recent protests that have erupted across the country since the death of George Floyd in Minneapolis.

“We, the NFL, condemn racism and the systematic oppression of Black People,” said Goodell in a post to Twitter encouraging all NFL players to “speak out and peacefully protest.”

Goodell apologized for not listening to NFL players who had previously spoken out against racial injustice in the country.

“We are listening, I am listening,” Goodell added.

When Colin Kaepernick took a knee during the national anthem to take a stand against police brutality and racial injustice in 2016, he was mostly alone.

Politicians, team owners and fellow players criticized him, fans burned his jersey, and he was booed even at home. Four years later, his protest is widely viewed as prescient. Global opinion has shifted so much that more people are now vilifying those who attack Kaepernick or misrepresent his stance.

New Orleans Saints star quarterback Drew Brees issued a public apology Thursday after he was excoriated by teammates, other athletes and fans for saying he “will never agree with anybody disrespecting the flag of the United States.”

That sentiment has been voiced loudly by Kaepernick’s critics and President Donald Trump reiterated it Friday, saying on Twitter: “I am a big fan of Drew Brees. I think he’s truly one of the greatest quarterbacks, but he should not have taken back his original stance on honoring our magnificent American Flag. OLD GLORY is to be revered, cherished, and flown high... We should be standing up straight and tall, ideally with a salute, or a hand on heart. There are other things you can protest, but not our Great American Flag - NO KNEELING!”

Still, George Floyd’s death, which ignited nationwide protests over racial injustice and police brutality, awakened many people to the root of the issues that led to Kaepernick’s peaceful demonstration — an expression meant to raise awareness of such issues, not demean the flag or the anthem. The 32-year-old Kaepernick hasn’t played in the NFL since 2016.

“The protest is really trying to hold us accountable for the things we say we believe in. It’s about equality and justice for all," said Houston Texans wide receiver Kenny Stills, who has been taking a knee during Week 1 of the 2016 season.

“There’s a lot of parallels between Colin and my father,” said Ali’s daughter, Khaliah. “He stands 100 percent with integrity no matter the cost. He made an unwavering commitment for the betterment of his people and took an unapologetic stance against injustice. I have had many people attempt to discourage our support of Colin, which is unthinkable to me. He is a friend to our family, he is loved and honored.”

Jacob Ali-Wertheimer, the 21-year-old grandson of the boxing legend, is a human and civil rights leader on Harvard University’s campus. He is encouraged because more folks support Kaepernick’s movement but realizes there’s a long way to go.

“A lot of people don’t want to address race in this country. We don’t have a real dialogue on the issue,” Ali-Wertheimer said.

“It’s something we try to hide and push away, and because we don’t confront it, I think that’s why both of them were ostracized in the beginning, and I think it’s wonderful that people are coming along now to what Colin said.

"But we need to get to a point where people can understand and listen and appreciate his message from the beginning moving forward.”

The NFL and its teams have voiced their support for equality and called for change. Players want to see more. In a video released Thursday night, 2018 NFL MVP Patrick Mahomes and several of his peers asked the league to “condemn racism and the systemic oppression of black people” and “admit wrong in silencing players from peacefully protesting.”

The league issued a statement prior to the video saying: “We stand with the black community because black lives matter. Through Inspire Change, the NFL, players and our partners have supported programs and initiatives throughout the country to address systemic racism. We will continue using our platform to challenge the injustice around us.”

The Jacksonville Jaguars protested against inequality and police brutality on Friday, marching from their stadium to the steps of the sheriff’s department.

“Today we say no more,” wide receiver Chris Conley said. “Today we see a nation that can’t await change, a city that won’t sit still or be quiet.”

The march included Joshua Dobbs, Brandon Linder and Josh Lambo of the Jaguars along with family members. Coach Doug Marrone, general manager Dave Caldwell and assistant coach Terry Robiskie also walked in what the team called an attempt to “raise awareness for racial injustices against the Black community,” with many wearing “Black Lives Matter” T-shirts.

The protest came two days after owner Shad Khan spoke against racism in a letter on the team website. He promised then the franchise would work toward a “timely response.” Former Jaguars receiver Ernest Wilford, now an officer at the department, joined them on the steps at the sheriff's office.

Comments from Goodell and protests from NFL players are the latest a larger response from the professional sports world to Floyd's death.

Two-time NBA MVP Stephen Curry marched in a protest Wednesday along with his wife and four teammates from the Golden State Warriors, including Klay Thompson. Shaq Thompson and four other Carolina Panthers walked in a protest march Monday in Charlotte, with Thompson helping lead the way.