ATLANTA - The men and women of the U.S. Navy's Blue Angels and the Air Force's Thunderbirds flew over Atlanta to salute the first responders, medical workers, and essential workers on the frontlines in the battle against the novel coronavirus.

"American medical workers" in Atlanta were be honored with a flyover on Saturday, May 2. It is part of Operation America Strong announced by President Donald Trump last week.  On Thursday it was announced that the flyover would begin earlier, at 1:35 p.m., and last roughly 25-minutes. The flyover was originally scheduled for 2:20 p.m. and would last about 20-minutes. 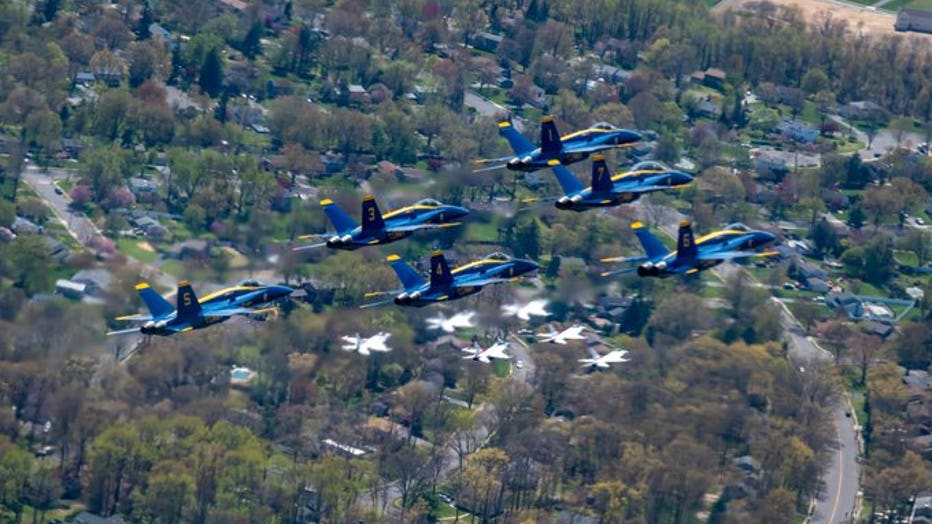 The U.S. Navy's Blue Angels and the Air Force's Thunderbirds demonstration teams flew over New York and Trenton to salute healthcare workers and first responders at the forefront of the fight against COVID-19 on April 28, 2020. (U.S. Air Force)

“America Strong is a way for both teams to show appreciation to the thousands of doctors, nurses, first responders and essential workers out there serving on the frontline day-in and day-out,” said Cmdr. Brian Kesselring, U.S. Navy Blue Angels commanding officer and flight leader for the flyover. “This is an extraordinary and unprecedented time but we will get through this. We are all in this together.”

Typically, the two demonstration teams will headline events individually, so the show of unity is truly an extraordinary event.

Those who safely cannot go outside to see the skilled aviators will likely hear and even feel the roar of the engines of the six Air Force F-16C/D Fighting Falcons and six Navy F/A-18C/D Hornets. It is a salute generally reserved for very few people.

“We are honored to fly over these cities in a display of national unity and support for the men and women keeping our communities safe,” said U.S. Air Force Lt. Col. John Caldwell, Thunderbird commander and lead pilot. “These flyovers are a gesture of goodwill on behalf of the entire Department of Defense to the heroes of the COIVD-19 pandemic.”

While 12 pilots will be flying over Atlanta on Saturday, the aviation teams consist of hundreds of skilled career military men and women, who also send their messages of thanks and praise with their pilot ambassadors.

The dual delta-wing formations of the two military flight demonstration teams have already flown over a few cities and more are expected in the weeks to come. 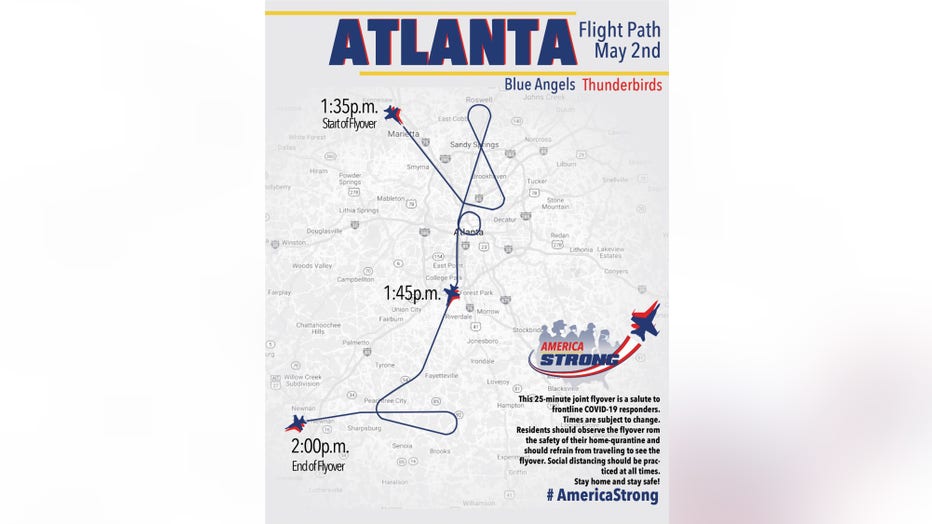 Thunderbirds and Blue Angels flight route over Atlanta for Saturday May 2, 2020.

Residents are asked to refrain from traveling to landmarks to view the flyover and to make sure social distancing is being practiced. They do encourage anyone who snaps a picture of video f them to tag the teams on social media at @AFThunderbirds and @BlueAngels using the #AmericaStrong and #Inthistogether.