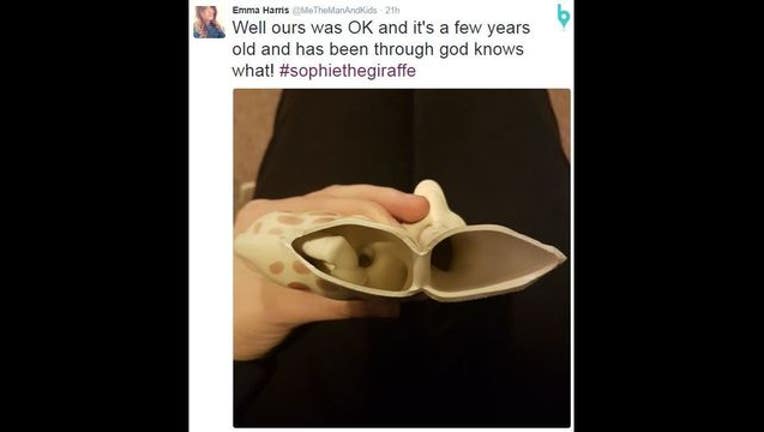 OAKLAND, Calif. (KTVU) - The popular baby teething toy - Sophie the Giraffe - is under fire after reports of parents finding mold inside the toy.

Sophie the Giraffe is a very popular baby gift and it runs about $25.

The panic over mold found in “Sophie” started with one post by a pediatric dentist who is also a parent. She was horrified to find mold inside the toy.

"I decided to cut into Sophie out of curiosity and discovered a science experiment living inside," Dr. Dana Chianese told Goodhousekeeping.com. "Smelly, ugly mold living in my infant's favorite chew toy."

Chianese said she followed the Sophie the Giraffe care instructions and never soaked it in water.

Now some concerned parents have cut open their Sophie the Giraffe toys to check for mold. Some have found mold, while many have found a clean interior of the giraffe.

Emma Harris sent us a photo saying hers was clean and it's a few years old and has been through the ringer.

Another Twitter user says "Sophie in your defense we have had you for four years and there is no water and no mold."

KTVU reached out to Vulli, the company who makes Sophie the Giraffe for comment. Vulli released the following statement:

"First of all, it's important to know that Sophie la giraffe is composed of 100% natural rubber, so the cleaning instructions have to be carefully respected. As indicated on the packaging and in an explanatory leaflet inside the packaging, we recommend to clean the surface of Sophie la giraffe with a damp cloth. It should not be immersed in the water nor rinsed off, to prevent water from getting inside, as she may become damaged. We thus would like to emphasize on the fact that it is important, while cleaning the product, that no water gets inside the hole.

As of now, Sophie la giraffe manufacturer has not been contacted by Mrs. Chianese nor Mrs. Opera and were not aware of the situation before reading the article. It is thus difficult for us to comment on the current situation, as we haven't had the chance to examine the products.

Based on the assessment the Sophie La Giraffe quality department can make from the pictures shown in the article, it is not possible that saliva could cause the type of mold formation shown in the pictures. Internal studies have been conducted and indicated that it is improbable (or in really rare cases) that saliva can transform into mold. It seems that the inside body of the giraffe is still wet, which leads us to believe that there was presence of water inside the giraffe, which caused the mold. This situation is often seen with bath toys. We can furthermore assert that this situation occurred after the product was purchased. Therefore, it is important to be careful while cleaning the toy to ensure that no water gets inside the giraffe.

Furthermore, please know that the safety of children and satisfaction of their parents is our main priority. For the past 55 years, we have always strived to exceed security standards and all of our products comply with the most stringent global standards.”

Doctor A.K. Misra, Medical Director US Healthworks, tells KTVU most black mold is not all that dangerous. "I understand where the fear comes from and (the mold) doesn't look nice but that's not to say that we should be that worried about it. Most of it is OK actually." He says he believes moisture got consolidated into the toy which resulted in the black mold. He says his daughter has "Sophie" and he's not concerned. He doesn't think there's no problem as long as a damp cloth is used to clean the outside of "Sophie." He says do not submerge "Sophie" or toys like that.

Dr. Misra says there are symptoms to look out for which include coughing, sneezing and red eyes. He says if those symptoms appear a patient should be checked out for a mold allergy.