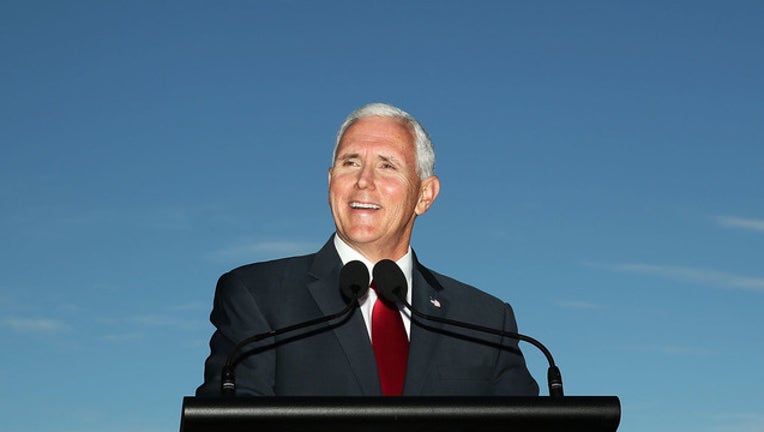 SAVANNAH, Ga. - Vice President Mike Pence is coming to one of the South's biggest street parties: the sprawling St. Patrick's Day parade in Savannah that's expected to draw 500,000 or more gaudy green revelers to the Georgia coast this weekend.

Mayor Eddie DeLoach plans to host Pence and members of the vice president's family Saturday, when locals and tourists toting plastic cups of beer will cram the sidewalks and oak-shaded squares along the 2.25-mile (3.6-kilometer) parade route through Savannah's downtown historic district.

"It's always fun to have a special guest come to the parade," Michelle Gavin, a city spokeswoman, told reporters at a news conference Tuesday. "And what a great honor to have the vice president of the United States come to the parade and shine a national spotlight on this event."

The Savannah trip was also confirmed by Pence's office in Washington, though details of the visit were not immediately made public.

Irish immigrants to Savannah and their descendants have been celebrating St. Patrick's Day with a parade since 1824. The March 17 holiday has ballooned into the city's single largest tourist attraction, making it one of the South's biggest street parties after Mardi Gras in New Orleans.

Local officials declined to comment Tuesday on how security measures for Pence's visit might disrupt the celebration for parade goers, who often arrive to the parade with party tents, full picnics and coolers packed with soft drinks and alcohol.

At least two sitting presidents - William Howard Taft in 1912 and Jimmy Carter in 1978 - have visited Savannah on St. Patrick's Day to address the evening banquet of the local Hibernian Society, the Irish social group that started Savannah's parade 194 years ago.

Brian Counihan, chairman of the private committee that organizes Savannah's parade, said he's unaware of any U.S. presidents or vice presidents taking part in the parade before Pence. He said he doesn't know why Pence decided to visit Savannah for the holiday.

"I just know he's coming and we're excited to have him here," Counihan said.

In some ways, Pence may seem out of place at a St. Patrick's Day celebration where bars open at 7 a.m. and drinking on the street is perfectly legal. Pence, an evangelical Christian, has said he won't attend events where alcohol is served without his wife. Karen Pence told a crowd recently that her husband likes to unwind on Fridays with a non-alcoholic beer.

However, organizers of Savannah's parade have long stressed the holiday's religious roots and celebration of Irish heritage. Pence has proudly noted in political speeches that his maternal grandfather, Richard Michael Cawley, came to the U.S. from Ireland in 1923.

"He got off that boat an Irish lad," Pence said in 2006 when he served in Congress. "He died an American, and I am an American because of him."

RELATED: Officials warn drivers not to drink and drive this St. Patrick's weekend