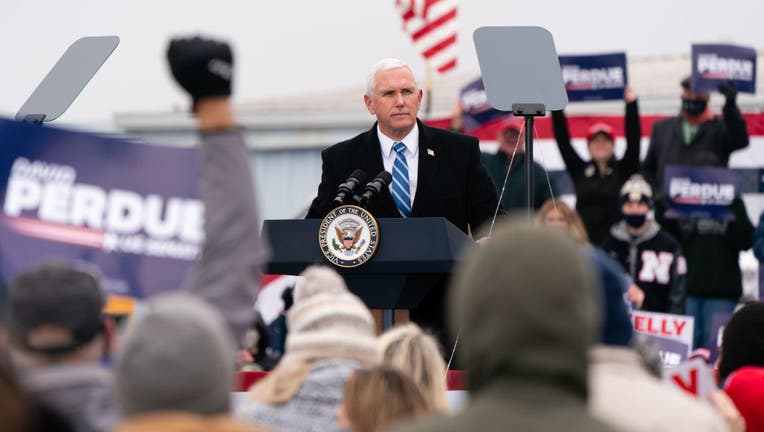 MILNER, Ga. - Vice President Mike Pence will be back in Georgia the day before the state's pivotal Senate runoff elections next week.

In a Tweet, Georgia state Sen. Burt Jones said that Pence will be at a church in Milner, Georgia on Monday, Jan. 4,

The Senate runoffs — which became necessary when no candidate received a majority of the votes in November — have put Georgia squarely in the national political spotlight, as they will determine the balance of power in Washington at the outset of Democrat Joe Biden’s presidency. Both major parties and activist groups are plowing tens of millions of dollars into the state ahead of Jan. 5, when Perdue and Loeffler bid to hold off Democrats Jon Ossoff and Rev. Raphael Warnock, respectively.

Republicans need one victory to maintain their Senate majority. Democrats need a Georgia sweep to force a 50-50 Senate and position Vice President-elect Kamala Harris as the tiebreaking vote. Highlighting the importance of the race, Biden visited the state Tuesday to campaign for Ossoff and Warnock.

Pence has previously visited the state several times to rally electoral support for the state’s two Republican senators, telling voters at a rally in August last week that "We will win Georgia and save America."

A look at the final stretch in the U.S. Senate runoff races and the heavy-hitting political names coming to Georgia to help their party's candidate.

Georgia voters have already been turning out in huge numbers despite the holidays and the pandemic. More than 2.8 million have voted early either in person or by mail — more than half of the 5 million total votes cast in Georgia in November.

Along with Pence, both sides have called on their heaviest hitters to help turn out supporters. President Donald Trump has scheduled a Monday rally with Perdue and Loeffler in conservative northwest Georgia. Vice President-elect Kamala Harris plans to campaign with Ossoff and Warnock on Sunday in Savannah, followed by President-elect Joe Biden in Atlanta on Monday.

Pence's rallies will be at the Rock Creek Church with doors opening at 10 a.m.