Georgia’s constitutional amendments on the ballot

Understanding the proposed constitutional amendments on the ballot.

ATLANTA - Before heading to the polls, voters should study everything on the ballot.

Certain questions, like the proposed constitutional amendments, have some voters confused.

FOX 5 spoke with an Atlanta area attorney about what the questions mean and how it impacts Georgians.

Alan Holcomb with The Law Center told FOX 5's Brian Hill questions are generally written in a particular way to get a certain vote. Some people voting in Brookhaven on Tuesday afternoon described the amendment questions as poorly written and hard to read.

"After reading it a few times, reading it over - you have a better understanding so you can make a better decision," Donovan Sawyer described.

Holcomb said the language tends to be more complex than it should be.

For instance, the second proposed constitutional amendment asks in part "shall the constitution of Georgia be amended to waive sovereign immunity and allow the people of Georgia to petition the superior court for relief from government acts done outside the scope of lawful authority..."

"My mom voted in Gwinnett and she wasn't really sure what the amendments were saying," Jasmin Hernandez, who voted at the Lynwood Recreation Center in Brookhaven, described. 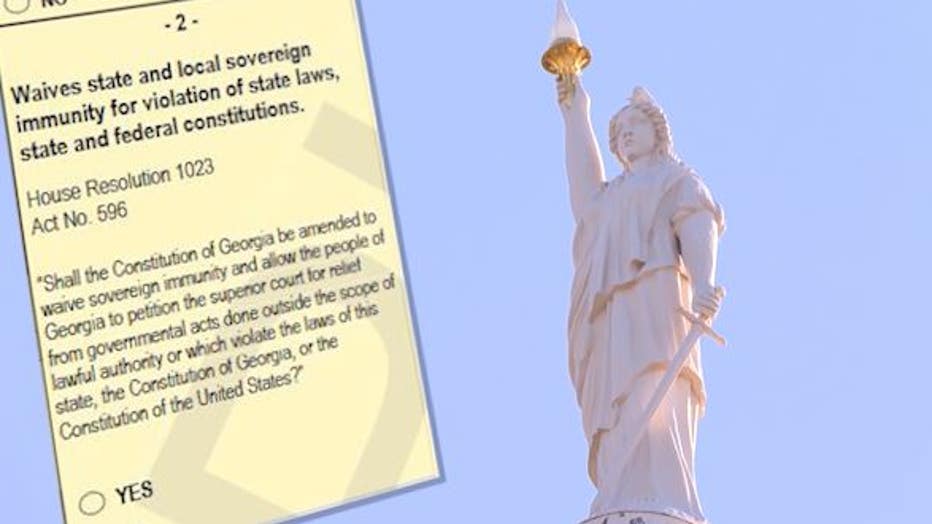 Holcomb said "it's essentially asking citizens of the State of Georgia if they want to have the ability themselves to bring a lawsuit, or seek redress, from state and local governments if there's a law that violates or fringes on their constitutional rights."

Sovereign immunity means the government cannot be sued without its consent.

Holcomb said voting 'yes' will change the law. If you vote 'no', the current legislation stays.

"These amendments are written in certain ways to try and get a certain outcome. It's very difficult for your average, everyday citizen to understand what the amendment actually means and what the consequences would actually be," he described.

The other constitutional amendment, regarding fees and taxes, also left some folks scratching their head.

"It would require the government, the state legislature, when they allocate funds, taxpayer dollars to use the funds for the purpose actually intended in the bill,' Holcomb, who is based in Atlanta, described.

He said it’s very important to study your county’s sample ballot to see specific questions about your local community.