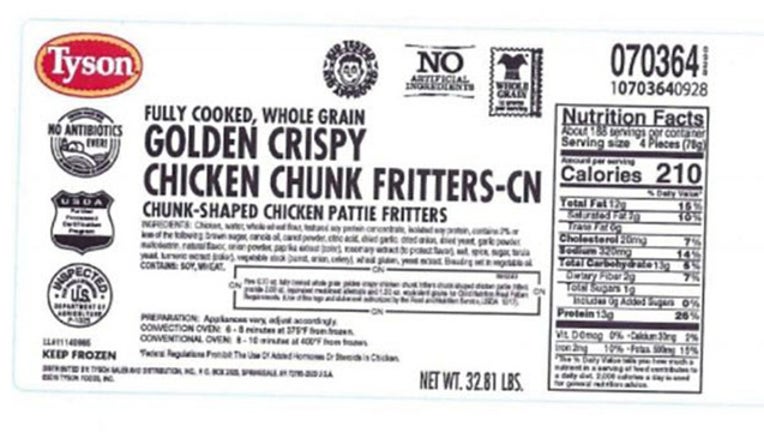 Tyson Foods recalled chicken fritters that were sold to schools and other institutions. (FSIS)

The frozen ready-to-eat chicken fritters being recalled were handed out to institutional foodservice locations and not sold in supermarkets or grocery stores, the FSIS wrote in a news release. Officials said they were notified last Wednesday of reports of three people finding “foreign material” in the breaded chicken fritters that were handed out at schools.

People did not report any injuries or other adverse reactions after eating the chicken fritters.

The 8.2-pound bags of fully cooked, whole grain golden crispy chicken chunk fritters were produced on Feb. 28 and came in 32.81-pound cases. They have the establishment number “P-1325” inside the USDA mark of inspection.

FSIS categorized the recall as "Class I," meaning the food item was a health hazard and there was "reasonable probability that the use of the product will cause serious, adverse health consequences or death."

Officials said they were concerned the chicken fritters may be in food service freezers and advise people to throw the items away or return them to be replaced.