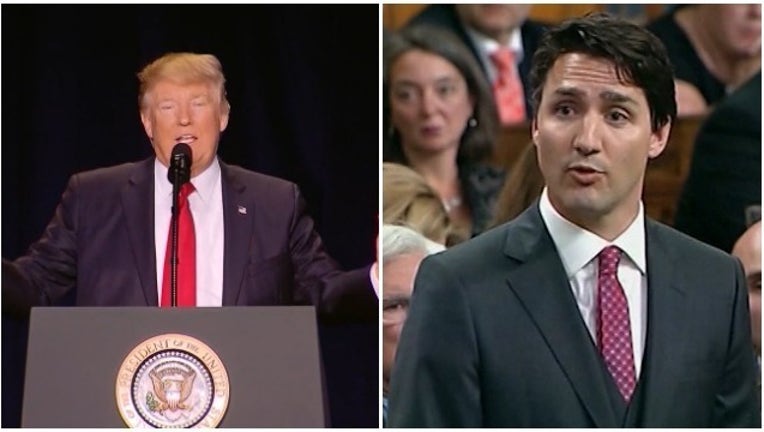 WASHINGTON (AP) - President Donald Trump remained non-committal about the future of the North American Free Trade Agreement on Wednesday as he welcomed Canadian Prime Minister Justin Trudeau to the White House amid simmering disputes over trade between the two North American neighbors.

Trudeau joined Trump in the Oval Office at the start of a new round of talks over the North American Free Trade Agreement, which the U.S. president has threatened to withdraw from if he can't negotiate a better agreement with Canada and Mexico.

"We're negotiating a NAFTA deal. It's time after all of these years and we'll see what happens. It's possible we won't be able to make a deal and it's possible that we will," Trump said, noting the close relations between the two countries and leaders.

"We have to protect our workers and in all fairness the prime minister wants to protect Canada and his people also. So we'll see what happens with NAFTA," Trump said, adding that it "has to be fair to both countries."

Trudeau, in his brief remarks to reporters, spoke of the ties that bind the two neighbors and major trading partners.

"We have an incredibly close relationship. Two countries that are interwoven in our economies and our cultures and our peoples," Trudeau said. "But we have a good partnership ... and that's why having an ongoing constructive relationship between the president and the prime minister is really important."

The trade negotiations this week in Washington have gotten off to a rocky start, with the U.S. Chamber of Commerce warning that the Trump administration might be sabotaging the talks with unrealistic proposals.

The Canadian prime minister, making his second visit to the White House this year, was also expected to raise the Trump administration's recent decision to hit Canadian manufacturer Bombardier with punishing tariffs on its C Series airliner.

U.S.-based Boeing alleges that Bombardier gets unfair subsidies from the Canadian and British governments.

Trump, who made trade a key part of his 2016 presidential campaign, has repeatedly criticized Canada, alleging that it unfairly blocks U.S. dairy products and subsidizes its softwood lumber industry.

Trudeau is scheduled to visit Mexico on Thursday to hold additional discussions on NAFTA.