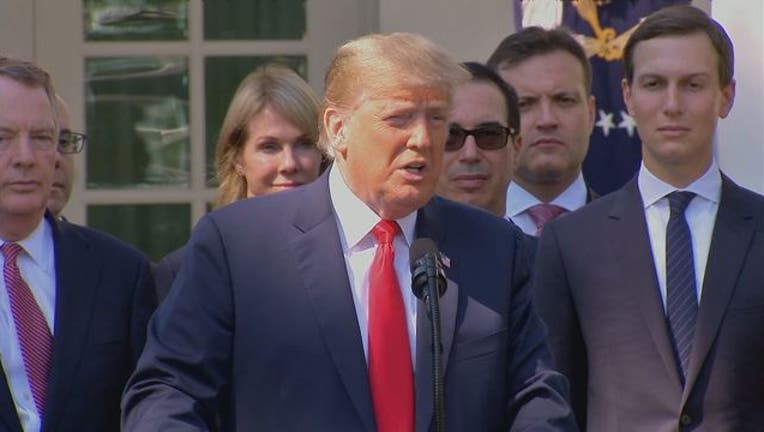 WASHINGTON - (AP) -- President Donald Trump hailed his revamped North American trade agreement with Canada and Mexico as a breakthrough for U.S. workers on Monday, vowing to sign it by late November. But it still faces a lengthy path to congressional approval after serving for two decades as a political football for American manufacturing woes.

Embracing the U.S.-Mexico-Canada Agreement, which the Canadians joined just before a Sunday midnight deadline, Trump branded it the "USMCA," a moniker he said would replace the 24-year-old North American Free Trade Agreement, or NAFTA. With a satisfied smile, the president said the new name had a "good ring to it," repeating U-S-M-C-A several times.

But he noted that the agreement would need to be ratified by Congress, a step that could be affected by the outcome of the fall elections as Democrats seek to regain majorities in the House and Senate. When a reporter suggested he seemed confident of approval after his announcement, he said he was "not at all confident" — but not because of the deal's merits or defects.

"Anything you submit to Congress is trouble, no matter what," Trump said, predicting that Democrats would say, "Trump likes it so we're not going to approve it."

Canadian Prime Minister Justin Trudeau said Monday that his country was in a more stable place now that it had completed the negotiations. He said the deal needed to be fair since one trading partner was 10 times larger. He said Canada did not simply accept "any deal."

"We got the right deal. We got a win-win-win for all three countries," Trudeau said.

Likewise, outgoing Mexican President Enrique Pena Nieto said via Twitter that the deal negotiated over the past 13 months "achieves what we proposed at the beginning: a win-win-win agreement."

Despite Trump's jibe at the Democrats, their comments on the agreement were largely muted, though many lawmakers said the way the provisions of the deal are enforced would be critical.

"As someone who voted against NAFTA and opposed it for many years, I knew it needed fixing. The president deserves praise for taking large steps to improve it," said Senate Democratic leader Chuck Schumer of New York. He said any final agreement "must be judged on how it benefits and protects middle class families and the working people in our country."

Vermont Sen. Bernie Sanders, an independent who sought the 2016 Democratic presidential nomination, said that while the plan included "some improvements that could be good for U.S. workers, it lacks enforcement mechanisms that are necessary for these policies to succeed."

Trump, for his part, said the accord would return the United States to a "manufacturing powerhouse."

In fact, the U.S. has always been a manufacturing powerhouse and by some projections — made before he took office — is expected to be No. 1 in 2020.

The new agreement was forged just before a midnight deadline imposed by the U.S. to include Canada in a deal reached with Mexico late in the summer. It replaces NAFTA, which Trump has lambasted as a job-wrecking disaster that has hollowed out the nation's industrialized base.

NAFTA has long been a lightning rod for criticism among labor unions and manufacturing workers since it was being negotiated in the early 1990s during President George H.W. Bush's administration and later implemented by President Bill Clinton.

The new version would give U.S. farmers greater access to the Canadian dairy market. But it would keep the former North American Free Trade Agreement dispute-resolution process that the U.S. wanted to jettison. It offers Canada protection if Trump goes ahead with plans to impose tariffs on cars, trucks and auto parts imported into the United States.

NAFTA reduced most trade barriers in North America, leading to a surge in trade between the three countries. But Trump and other critics said it encouraged manufacturers to move south of the border to take advantage of low-wage Mexican wages.

The new pact will require regional content of 75 percent for automobiles, and also that 40 to 45 percent of vehicles coming to the U.S. be produced in plants paying at least $16 per hour. Mexico's incoming foreign relations secretary, Marcelo Ebrard, said some new regulations may pose challenges for companies to adapt to. However, he also said that "finishing this process of renegotiation provides certainty for financial markets, investment and job creation in our country."

In all, Trump said, the pact covers $1.2 trillion in trade.

For Trump, the agreement offered vindication for his hardline trade policies that have roiled relations with China, the European Union and America's North American neighbors while causing concerns among Midwest farmers and manufacturers worried about retaliation. Trump's advisers view the trade pact as a political winner in battleground states critical to the president's 2016 victory and home to tens of thousands of auto workers and manufacturers who could benefit from the changes.

Trump said he would sign the final agreement in late November, in about 60 days, and the pact is expected to be signed by Trudeau and by Mexico's Pena Nieto who leaves office Dec. 1. Trump said he spoke to Trudeau by phone and that their recent tensions didn't affect the deal-making. "He's a professional. I'm a professional," Trump said, calling it a "fair deal."

Canada, the United States' No. 2 trading partner, is by far the No. 1 destination for U.S. exports, and the U.S. market accounts for 75 percent of what Canada sells abroad.

But the president said his administration had not yet agreed to lift tariffs on steel and aluminum imports from Canada, a contentious issue between the two neighbors.

Trump has used U.S. tariffs on billions of dollars' worth of imported goods from China and other nations as a negotiating tactic and said the North American deal offered evidence that his approach was working. "Without tariffs, we wouldn't be standing here," he said.

The future of the agreement has also been a major issue in Mexico, where Pena Nieto will be replaced by President-elect Andres Manuel Lopez Obrador in December. Uncertainty over the fate of NAFTA talks had threatened to batter Mexico's currency and economic outlook.

Ratifying the deal is likely to stretch into 2019 because once Trump and the leaders from Canada and Mexico sign the agreement, the administration and congressional leaders will need to write legislation to implement the deal and win passage in Congress.

"The bar for supporting a new NAFTA will be high. NAFTA has had many critics over the years and its flaws are well-known," said Rep. Richard Neal, D-Mass. "Like me, many of my colleagues did not support the deal originally. And those who did will have serious questions that they need answered before doing so again."