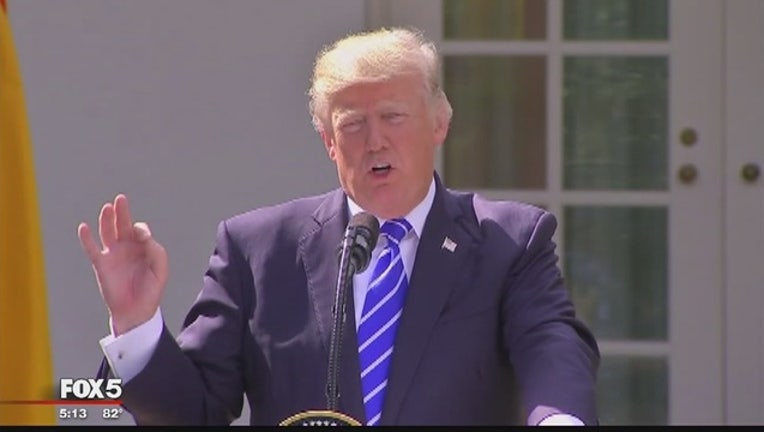 WASHINGTON (AP) - President Donald Trump and congressional Republicans are proposing a far-reaching plan Wednesday that would cut taxes for individuals and corporations, simplify the tax system and nearly double the standard deduction used by most Americans.

"Too many in our country are shut out of the dynamism of the U.S. economy, which has led to the justifiable feeling that the system is rigged against hardworking Americans," says the blueprint, obtained by The Associated Press. "With significant and meaningful tax reform and relief, we will create a fairer system that levels the playing field and extends economic opportunities to American workers, small businesses, and middle-income families."

The public unveiling of the plan was set for later Wednesday.

The plan nearly doubles the standard deduction to $12,000 for individuals and $24,000 for families. This basically increases the amount of personal income that is tax-free.

It collapses the number of personal tax brackets from seven to three. By simplifying the system, most Americans would be able to file their taxes on a postcard, the plan says.

The individual tax rates would be 12 percent, 25 percent and 35 percent - and the plan recommends a surcharge for the very wealthy. But it does not set the income levels at which the rates would apply, so it's unclear just how much of a tax cut would go to a typical family.

The plan would seek to help families by calling for an increased child tax credit and opening it to families with higher incomes. The credit currently is $1,000 per child. The plan also seeks to limit the "marriage penalty" on the joint income of couples who both work.

Also proposed is a new tax credit of $500 to help pay for the care of the elderly and the sick who are claimed as dependents by the taxpayer.

Deductions for mortgage interest and charitable giving would remain, but the plan seeks to end most itemized deductions that can reduce how much affluent families pay. It retains existing tax benefits for college and retirement savings such as 401k contribution plans.

The estate tax - which is levied on millionaires - would be eliminated, a likely boon for wealthy individuals who inherit businesses, investments and real estate.

Corporations would see their top tax rate cut from 35 percent to 20 percent. For a period of five years, companies could further reduce how much they pay by immediately writing off their investments.

New benefits would be given to firms in which the profits double as the owners' personal income. They would pay at a 25 percent rate, down 39.6 percent. This creates a possible loophole for rich investors, lawyers, doctors and others, but administration officials say they will design measures to prevent any abuses.

The administration says say the tax plan is focused on helping middle class families. But - despite six months of talks with congressional leaders - the outline still lacks vital details about how middle class families would fare. There are also signs that the wealthiest sliver of Americans could still reap tremendous benefits from the proposed changes, even though Trump has suggested that rich will not be better off.