For years an elderly DeKalb County woman has worried about the old tires the store next door leaves feet from her property. Despite complaints and citations, they're still there.

DECATUR - For years an elderly woman has worried about the tires piling up by her home. There have been complaints. And citations. But they’re still there. It’s more than an eyesore; it’s a health hazard.

Carol Brown walked us through the yard up to the fence line.

"Here it is. And if you get close you can see the entire half of their property is covered up in tires."

This heaping pile is just feet from her 93-year-old mother’s yard.

"The problem is standing water in those tires. If you go out close to the fence, you just get attacked," she said.

Abutting her fence property is Peanza Tires Center. And it has tires alright. In the garage. In the building. Out in the parking lot. And her aging mother, who she says is allergic to mosquitoes, can't spend anytime outdoors.

"You can open the door to go in and out and mosquitoes go in the house and bite her in the house," Ms. Brown told the Fox 5 I-Team.

We met Peter Muigai. He wasn’t clear his role at the company, but we did find he was the registered agent with the secretary of state’s office. He told the Fox 5 I-Team he regularly disposes of old tires, but he admits he’s behind.

"These are our tires, but we do take them to the recycle every other week. But we are late three or four weeks now." 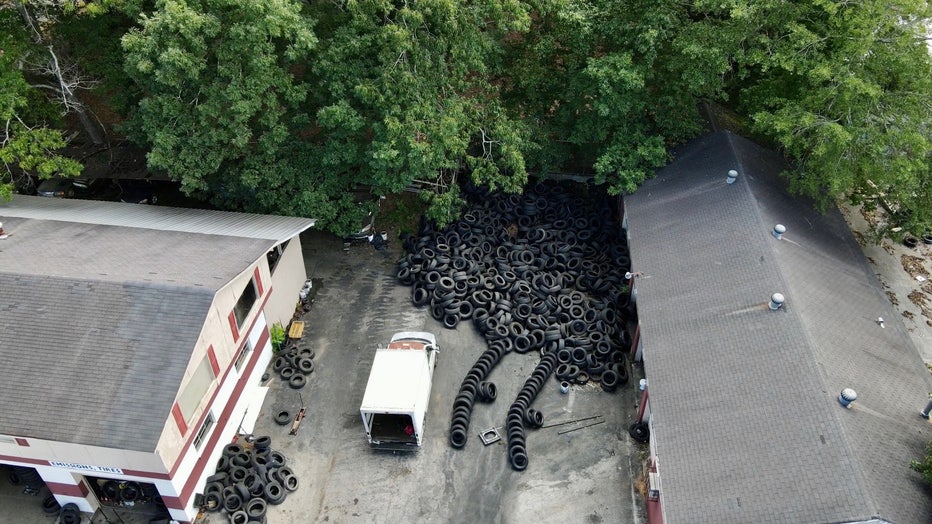 Tires stored outdoors and collecting water create a mosquito problem for a neighbor.

He handed me receipts that show over the last year he has shipped off some old tires, but certainly not enough paperwork to prove it’s done every other week. Then he explains what we’re seeing here.

"These are not trash. They are good tires," he said pointing to some of the tires in the parking lot near the fence. "These are bad tires."

"Yeah they’re going to a container," he assured us. "We are in the process of getting one of them."

Mr. Muigai admits the tire shop has a history with DeKalb County citing the business for improper tire storage. In 2009 the business was cited for exposed tires creating a hazard with mosquitoes. Two more similar citations in 2012. Again, in 2015.

It's been years since the homeowner complained to DeKalb County about the tire issue because the owner simply became too old to manage it. Then the pandemic hit.

Again, Peter Muigai said he's looking for better storage solutions, but he's admittedly been here for 14 years now without this type of container.

"We never had this kind of scenario," he added.

Ms. Brown disputes that, recalling a dangerous situation involving the pile of tires.

"They had a person they had arrested in a police car across the way. He opened the door, got out of the car, come running across here. Climbed up the tires, jumped the fence and came into our property."

Mr. Muigai says, yes, that did happen. "Yeah, seven years ago." He promises the tires will be properly stored soon. And asked us to come back and check on his progress.