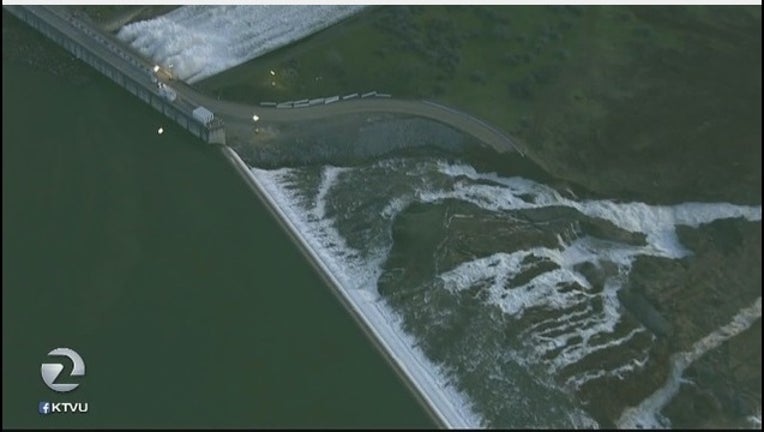 Officials issued an evacuation order for residents near the Oroville dam after the spillway failed.

OROVILLE, Calif. (AP) - The Latest on problems with an emergency spillway at the nation's tallest dam (all times local):

The National Weather Service's Sacramento office says rain will move through late Wednesday and Thursday morning, with 2 inches to 4 inches in the foothills and mountains. But the storm is looking colder than initially projected, meaning lower snow levels and less runoff into Sierra reservoirs than the storms last week.

The brunt of a Friday storm appears to be headed toward Southern California, with lighter rain in the north. Forecasters say rain will diminish Saturday, pick up on Sunday, followed by a wetter, more dynamic storm Monday into Tuesday.

A California dam inspector says authorities may never know the exact causes of the earth and concrete blow-outs below the Lake Oroville dam.

Emergency crews were working Tuesday to fill a hole in the emergency spillway for flood-water from the dam, which is the nation's tallest. Trouble at Lake Oroville started a week ago when workers noticed torrential rain and snow-melt had torn a hole in the dam's main spillway.

Eric Holland of the state Department of Water Resources' dam-safety division says any of a number of different problems could have caused the spillway troubles. Holland says authorities often never discover in these cases what exactly happened, because flood water has washed out everything at the scene.

Authorities have evacuated nearly 200,000 people in three counties while they work to ensure the dam can handle more rain expected later this week.

A little boy turning 3 years old at a California evacuation shelter almost didn't get a birthday party this year.

With just three hours left on his big day Monday, a group of California Highway Patrol officers showed up with a makeshift celebration at the Chico shelter. They brought him an ice cream cake, a balloon, a Captain America figurine, and of course, a song.

A Facebook Live video of the touching moment has gotten more than 40,000 views in just 12 hours and nearly 900 shares and counting.

CHP Officer Logan Callahan says he learned of the boy's birthday earlier in the day from the boy's father, who expressed disappointment in not being able to make his son a cake.

A father of a boy the same age, Callahan says he just had to do something.

Mike Wrobel, an area man who took the video, says other evacuees joined in the song and everyone was "grinning ear to ear."

Some 200,000 residents have been ordered evacuated after officials feared a spillway at the country's tallest dam was in danger of imminent failure. Water levels in the lake behind Oroville Dam have since receded, lessening the danger of catastrophic flooding downstream. But the evacuation order remains in place.

Spicer said at a Washington press conference that the president is in contact with state officials and working with federal disaster relief agencies.

Spicer said it's an example of why Congress needs to pass major infrastructure upgrades for the country.

Dozens of schools in evacuation areas below a damaged dam are closed, many for the week.

Nearly 200,000 people who evacuated over fears that a spillway at Lake Oroville could fail and unleash a wall of water have to stay away indefinitely while officials race to repair it before more rains arrive Thursday.

Other school officials say they will keep facilities closed until authorities tell them the area is safe.

The Marysville Joint Unified School District said Tuesday that it would close schools for the rest of the week. A dozen school districts in Butte County also are closed for the week.

Police say at least a handful of homes and businesses have been burglarized following an evacuation order Sunday over fears that a damaged spillway at Lake Oroville could fail.

Nearly 200,000 people who evacuated Sunday have to stay away indefinitely while officials race to repair the spillway before more rains arrive Thursday.

The Oroville Mercury Register reports (http://bit.ly/2kGTXzt ) that Lt. Gil Zarate says officers are beefing up patrols to dissuade crime amid empty homes and businesses. Police have made one arrest for burglary at a liquor store.

The Department of Water Resources will hold a news conference at noon to discuss progress made on repairing the damaged spillway.

Nearly 200,000 people, who evacuated Sunday over fears that a damaged spillway at Lake Oroville could fail and unleash a wall of water, have to stay away indefinitely while officials race to repair it before more rains arrive Thursday.

Crews working around the clock atop the crippled dam have made progress repairing the spillway.

Workers are hoisting giant white bags filled with rocks, and at least two helicopters will fly them to where they will be released in the spillway's erosion. Dump trucks full of boulders also are dumping their cargo on the damaged spillway.

State Department of Water Resources spokesman Chris Orrock says lake levels are dropping at a rate of 8 feet per day.

Crews working around the clock atop the crippled Oroville Dam have made progress repairing the damaged spillway.

Workers are hoisting giant white bags filled with rocks, and at least two helicopters will fly them and then release them in the spillway's erosion. Dump trucks full of boulders also are dumping their cargo on the damaged spillway.

The goal is to see the level at 860 feet by Thursday when inflows should begin from the expected storms. Orrock says the lake is currently at 884 feet.

The barrier at the nation's tallest dam is being repaired after authorities ordered the evacuation of nearly 200,000 people for everyone living below the lake amid concerns the spillway could fail and send water roaring downstream.

A huge Northern California reservoir, held in place by a massive dam, has always been central to the life of the towns around it.

Now the lake that has brought them holiday fireworks and salmon festivals could bring disaster.

Nearly 200,000 people, who evacuated Sunday over fears that a damaged spillway at Lake Oroville could fail and unleash a wall of water, have to stay away indefinitely while officials race to repair it before more rains arrive Thursday.

Evacuees felt strange on Monday to see their beloved lake associated with urgent voices on the national news.