Campaign to save historic Marietta theater

The Strand Theatre first opened as a motion picture house in 1935, with the September premiere of the Fred Astaire and Ginger Rogers classic Top Hat.

MARIETTA, Ga. - The ongoing pandemic has hit almost every kind of business hard, and that includes performing arts venues around the world. One of those is Marietta’s Earl and Rachel Smith Strand Theatre, which is celebrating its 85th birthday in the dark.

But right now, local philanthropist Stephen W. Imler is shining a little light on the historic theatre, pledging to match up to $50,000 in donations through the end of the year. Good Day Atlanta viewers know Imler as a regular during our Pet of the Day segment (representing the Humane Society of Cobb County), but he’s also been a longtime supporter of The Strand and says the theatre’s current closure due to the pandemic is one he doesn’t want to be permanent.

Imler’s match is the latest in a series of similar offers which The Strand is calling the Double Your Donation campaign; donations can be made through the theatre’s homepage. The venue is also selling “I Support The Strand” yard signs for $25, renting out its massive marquee for special messages, and allowing performers to book its stage for live stream events. 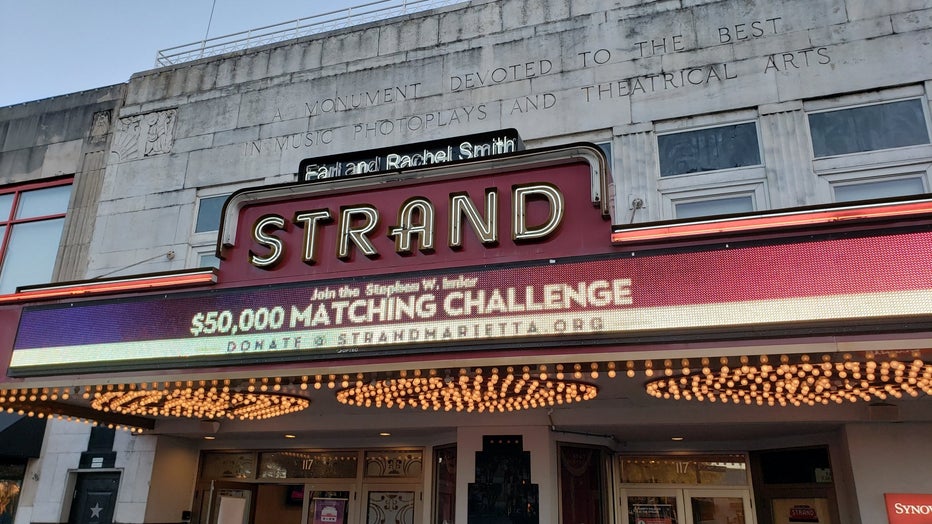 Now, for a little history! The Strand Theatre first opened as a motion picture house in 1935, with the September premiere of the Fred Astaire and Ginger Rogers classic "Top Hat." The theatre was renovated in 1964, but fell vacant by 2002; the group Friends of The Strand, Inc. formed that year, leading the way to raise money and restore the venue to its former glory.  Until the pandemic, it was hosting a variety of live programming, including the touring production of the star-studded play "Middletown," which we featured here on Good Day Atlanta in February.

We hadn’t been back inside The Strand since that morning in February, so we decided to make a return visit; click the video player to check out our morning exploring the historic theatre and learning more about the Double Your Donation campaign.