Birds are shrinking in size, and researchers believe it’s likely due to climate change

North American migratory birds have been getting smaller over the past four decades and the reason appears to be related to climate change, according to findings from a University of Michigan-led analysis of a large dataset.

LIVERPOOL, England - A new study by ecologists at the University of Liverpool warns that warmer temperatures causing male infertility could pose a "major threat" to many species amid the climate change crisis.

Scientists have been trying to better understand which species will be the most impacted by climate change so that they can plan effective conservation strategies. But to date, research on temperature tolerance has only focused on the temperatures that will kill organisms, rather than the temperatures at which living things can no longer breed, according to the study authors.

The study, published Tuesday in Nature Climate Change, analyzed the effects on 43 different Drosophila species, often referred to as the fruit fly. The study found that in almost half of the fruit fly species, males became sterile at lower than lethal temperatures.

In one of the species, called Drosophila lummei, males were found to become infertile at 4 degrees below their lethal limit. The researchers said to put that into context, 4 degrees is the temperature difference between summer in northern England and the south of France.

Researchers also studied the Drosophila species using temperature predictions for 2060 and found more than half of areas with temperatures cool enough for the fruit flies to survive will be too hot for the males to remain fertile.

"Our work (emphasizes) that temperature-driven fertility losses may be a major threat to biodiversity during climate change," Dr. Tom Price, senior researcher from the University of Liverpool, said in a statement. 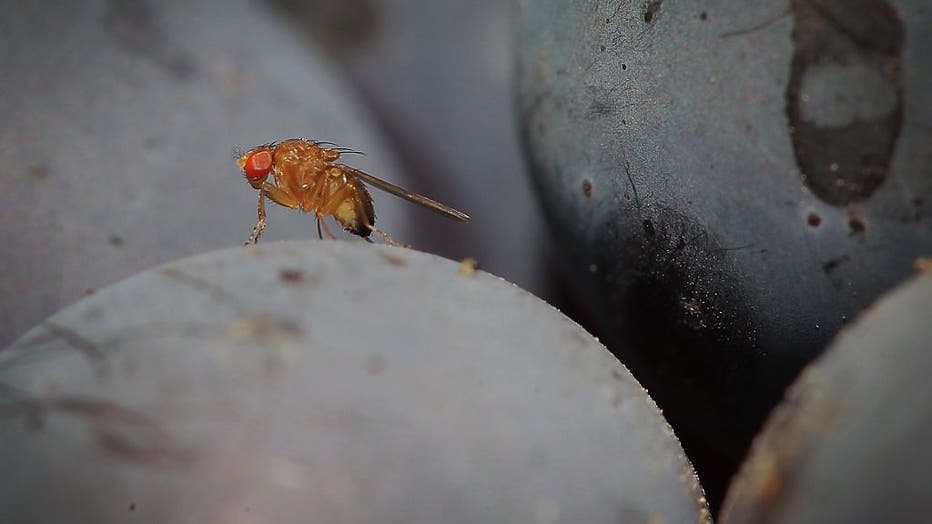 FILE - A spotted-wing Drosophila fly sits on a grape in a vineyard in central Germany on Sept. 10, 2014. (Photo credit: FREDRIK VON ERICHSEN/DPA/AFP via Getty Images)

Price said the team was already aware of reports of infertility at high temperatures "in everything from pigs to ostriches, to fish, flowers, bees, and even humans." He said the recent findings suggest that they are "not isolated cases, and perhaps half of all species will be vulnerable to thermal infertility."

"We now urgently need to understand the range of organisms likely to suffer thermal fertility losses in nature, and the traits that predict vulnerability," Price continued. "We must understand the underlying genetics and physiology, so we can predict which organisms are vulnerable, and perhaps produce breeds of livestock more robust to these challenges."

Dr. Simon Kerley, head of Terrestrial Ecosystems at NERC, called the findings a "highly exciting piece of work that turns on its head our thinking and assumption of the role, rate, and impact of climate change."

"It really starts to shed light on the hidden and subtle impact of the changing conditions on the myriad of animals that we perhaps take for granted and have not previously considered 'at risk' from our changing climate. Importantly, it alerts us to the understanding this risk could occur sooner than we thought," Kerley said.

Helen Mountford, the vice president for climate and economics at the World Resources Institute, discusses the Paris Agreement, an accord that President Biden rejoined.

Scientists say climate change, caused by coal plants, car engines and other fossil fuel use, has also led to worsening droughts, floods, hurricanes, wildfires and other disasters. Many governments around the world have made commitments to lower carbon emissions, including the U.S. — which aims to cut its fossil fuel emissions by as much as 52% by 2030.